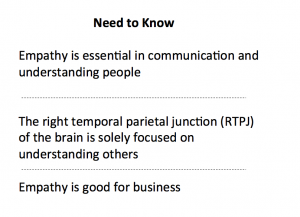 “I know you think you understand what you thought I said but I’m not sure you realize that what you heard is not what I meant.” – Alan Greenspan

Given that empathy seems to be at least a sign of weakness if not a ‘bad word’ (a la bleeding heart) in certain business (and political) circles – I’ve led off with the German equivalent so as not to scare anyone away. (I find it ironic that the German word Schadenfreude is getting much more airtime these days!)

This column is intended to be a complement to the previous article titled “Lessons Learned from Street People.”.

I suppose it is (more than) a bit controversial to have a business article focus on something like empathy – I can’t help but wonder how many of my topics fall into this category?

Regular readers will recognize I have already written extensively on this before in various contexts.

Clearly, this is a vast, complicated (but per the sister article relevant) topic so while I have a couple comments today – there will likely be more to come.

While I intend to focus on the topic of empathy (and as usual draw on research of others and my reading and experience) I would like to start with a story that not only involved empathy but also a topic that goes hand in hand and also reflects a perpetual challenge in business (and life) – defining yourself (and others) by limitations.

On a recent cross country junket, I was on a flight delayed out of Dallas. Needless to say there was a boarding area full of disgruntled people – with one exception.  There was a young girl confined to a wheelchair who had put on her headset presumably with ballet music as she was whirling a la a pirouette in her chair.

I was fascinated and lucky enough to make eye contact and exchange smiles. One of the most unbelievable parts of the experience was how many people were ignoring her.

Finally, they were boarding the flight and as I stood in line they announced ‘people needing special assistance’ should board.  At that point her mother was pushing the chair – the little girl turned and with the saddest eyes and most depressed body language asked her mother if she was going on first because she was handicapped. She looked at the agent who, of course, had done nothing to even acknowledge her.

It was at that point, with a flash of inspiration that I piped up – “No, I think you are going on because they board ballerinas first.”

Within a flash it was a different child!

And in a flash so many of the things I have learned about neuroscience and psychology were confirmed.

I share this story because I believe it illustrates the power of empathy – I am confident she believed me because we had established a rapport – two people who had shared an experience.

I share it also because the metamorphosis in that little girl illustrated (confirmed) to me a lot happens when we define ourselves (or let others) by our limitations.

Is this experience unique to a child in a wheelchair? I would argue (supported by several previous articles, as well as work by Simon Sinek and Frans de Waal) – no! The point is, this is illustrative of human interactions. This is indicative of the common denominator of all these articles – people.

“So maybe part of our formal education should be training in empathy. Imagine how different the world would be if, in fact, that were ‘reading, writing, arithmetic, empathy.’” Neil deGrasse Tyson

Let’s move on to a more scientific/academic plane – I call your attention to a recent TED Talk by Rebecca Saxe titled “How We Read Each Other’s Mind”. To me the most salient point here is there is a specific region of the brain (Right temporal parietal junction (RTPJ) that is solely focused on understanding others and thinking about others’ thoughts.

All this starts around five years old when we realize other people can have different beliefs. You would think by the time you are old enough to be a business builder or a business manager you would have mastered these skills!

It has been said children learn to read hearts before minds!

For my money the two definitive works on empathy and primates (most business people are primates although there are times….) are “The Age of Empathy” and “Good Natured” (1996!) by Frans de Waal.

Let me give last words to De Waal from “The Age of Empathy:”

“At the same time, there is no good answer to the eternal question of how altruistic is altruism if mirror neurons erase the distinction between self and other, and if empathy dissolves the boundaries between people. If part of the other resides within us, if we feel one with the other, then improving their life automatically resonates within us.  And this may not be true only for us.  It’s hard to see why a monkey would systematically prefer prosocial over selfish outcomes if there weren’t something intrinsically rewarding about the former.”

You know, this reflects more than good science – it is good business!

Agree? Disagree? Let me know your thoughts and personal experiences. And let’s remember to be empathetic to each other in the comments.

The Business Brain Model  occupies a special niche, bringing together decades of experience across a very wide range of business and finance with an extraordinarily in-depth knowledge of the interface of neuroscience and psychology, including the latest developments in those fast-changing domains. This provides a singular insight into how these disciplines interact, and how recent developments in brain science can have a dramatic effect on business success. Bud’s writings should be required re… END_OF_DOCUMENT_TOKEN_TO_BE_REPLACED

Rarely does a truly inspirational business leader come along who has achieved phenomenal success by challenging traditional thinking and is committed to sharing what he has learned with others – to improve business and the world. All too often organizations operate in cultures where tradition is revered and powerful systems prevent innovation from occurring. Yet both business and education are at a tipping point; mainstream practices are simply not sustainable – it must change.  Successful leade… END_OF_DOCUMENT_TOKEN_TO_BE_REPLACED

In the “Business vs. Science: Are you losing this fight” blog, Bud’s main question is “if the information is available but is not being used, I put the question to you – why” and I believe this strongly relates as to why people are the most difficult aspect of business. I think being open to change is a huge obstacle that needs to be overcome by individuals in businesses today. I agree that change is scary and often requires a lot of preparation before it can be implemented, but the result could… END_OF_DOCUMENT_TOKEN_TO_BE_REPLACED

“Thank you! This article (How To Exercise Your Decision Making Muscle) helped me close a deal over weekend! We had been working with an investment bank to get investment done in a client’s company for a long, long time. I used many tactics from the article including ‘go / no go date, analysis paralysis explanation and using imagination to see opportunity in a new light – I even gave a copy of the article to the banker. It was extremely timely and helpful – I ought to give you some of the commiss… END_OF_DOCUMENT_TOKEN_TO_BE_REPLACED

I really enjoyed reading the post on the value of people in a business and the difficulty associated with managing different personalities and skills. I particularly enjoyed the discussion on empathy as one of the most special and important gifts of our brain. I believe that empathy is an aspect of the human condition that affects so many aspects of social relationships, and can completely dictate the way we feel about someone, how we receive and react to them, and in the context of a busines… END_OF_DOCUMENT_TOKEN_TO_BE_REPLACED

“I’ve enjoyed the erudition of your written work, especially your piece on “Laughter In The Workplace”; wherein you gingerly skip from Plato, Aristotle, Hobbes, and Descartes over to Kant and Schopenhauer, (by way of Freud and Spencer) with Abe Lincoln added for good measure. Each individual in your pantheon, especially lately, Kant, has provided important guideposts along the way for my own growth. I particularly appreciated your Laughter piece because it helped me to smile and be more light-he… END_OF_DOCUMENT_TOKEN_TO_BE_REPLACED

The blog post “The Most Difficult Aspect of Business is People” is a very good read and I think most if not all business owners should read it. I completely agree with the author’s thoughts about empathy. I think that most individuals tend to categorize sensitivity and the ability to understand and share feelings with weakness, therefore this always leads to there being “that guy” in most businesses. I believe that businesses that show more empathy have greater chances of success as it improves… END_OF_DOCUMENT_TOKEN_TO_BE_REPLACED