Freaking out about the guy the “Freakonomics” guy freaks out about 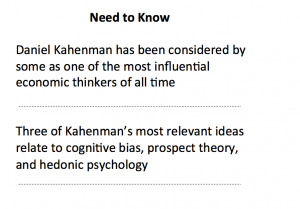 “Thinking is the hardest work there is, which is probably why so few engage in it.” – Henry Ford

The phrase Business Brain Model was chosen to illustrate the spectrum of disciplines that I consider to be relevant to the world of business – primarily neuroscience and psychology but not eliminating any area that would be relevant to more efficient and fairer business.

While I don’t believe any academic/scientist has worked across the full spectrum (Hell- it’s a big job for me just to cherry pick from the work of so many others!) – there is one scientist who has had his fingers in several (relevant) pies.

So who makes the “Freakonomics” guy freak out?

Meet Daniel Kahneman who has had a multifaceted career- involving three areas at the heart of the Business Brain Model.  I have focused on Kahne

man because as I think about my business career, I probably try to include lessons learned from him more than any other individual. Just to be clear – I am referring to specifics, but also directional stuff – idiosyncrasies of brain and thinking in business.

Steven D. Levitt, co-author of “Freakonomics,” calls Kahneman “the non-economist who has had the greatest influence on economics of any non-economist who ever lived.” And goes on to place him “among the 50 most influential economic thinkers of all time….” That’s right – in the history of the world!

Incidentally, my kudos pale by comparison to the fact he was one of only two psychologists (the other was actually both an economist and a psychologist) to receive the Nobel Prize in Economics. Much of the work he did in economics was with Amos Tversky who passed away before Kahneman’s earning the prize in 2002. But the Nobel Prize rewards not only accomplishments, but longevity. (Kahneman to his credit – you can’t hide class! – basically stated in the Nobel Prize interview that he considers it to be a joint prize.)

Obviously he is worth freaking out about. But here’s a question – who do you freak out about? Or maybe a better question: if you had a dinner party for the great economic minds of all time (living or dead) which three people would you invite? Let us know in the comments section.

Back to Kahneman’s work, here are his most relevant ideas in three areas:

Whether thinking fast or slow, two landmines you should avoid

Of course, the classic (i.e. popular press) contribution of Kahneman is “Thinking, Fast and Slow” published by Farrar, Straus and Giroux in 2011.

You have to be impressed by someone who is committed to keeping things simple – imagine human thought being described as simply system one (fast) and system two (slow). In short – he illustrated that feeling is a (easier) form of thinking.

Given our previous posts on thinking errors – I will just touch on cognitive biases (thinking errors) highlights here and deal with prospect theory (human nature vs. utility value) and hedonic psychology (science of happiness) in the next post.

Since my previous posts on this topic contained much detail – I have a different approach here. Below are categories that I think several specifics fit under. As always – I’m focused on relevant aspects and in a memorable context.

“I always like to look on the optimistic side of life, but I am realistic enough to know that life is a complex matter.” ~ Walt Disney

So – as our quick ‘refresher course’ here are my top two picks for areas to watch:

If you can stay off these landmines – you will have a much better day!

Recent Articles
A Metaphor For The Times

Decision Making Front Page Slider Uncategorized Values
Effectiveness VS Efficiency: Striving for greater efficiency when there is a much more effective option available may be disastrous [GUEST POST]

The Business Brain Model  occupies a special niche, bringing together decades of experience across a very wide range of business and finance with an extraordinarily in-depth knowledge of the interface of neuroscience and psychology, including the latest developments in those fast-changing domains. This provides a singular insight into how these disciplines interact, and how recent developments in brain science can have a dramatic effect on business success. Bud’s writings should be required re… END_OF_DOCUMENT_TOKEN_TO_BE_REPLACED

“Thank you! This article (How To Exercise Your Decision Making Muscle) helped me close a deal over weekend! We had been working with an investment bank to get investment done in a client’s company for a long, long time. I used many tactics from the article including ‘go / no go date, analysis paralysis explanation and using imagination to see opportunity in a new light – I even gave a copy of the article to the banker. It was extremely timely and helpful – I ought to give you some of the commiss… END_OF_DOCUMENT_TOKEN_TO_BE_REPLACED

“I’ve enjoyed the erudition of your written work, especially your piece on “Laughter In The Workplace”; wherein you gingerly skip from Plato, Aristotle, Hobbes, and Descartes over to Kant and Schopenhauer, (by way of Freud and Spencer) with Abe Lincoln added for good measure. Each individual in your pantheon, especially lately, Kant, has provided important guideposts along the way for my own growth. I particularly appreciated your Laughter piece because it helped me to smile and be more light-he… END_OF_DOCUMENT_TOKEN_TO_BE_REPLACED

In the “Business vs. Science: Are you losing this fight” blog, Bud’s main question is “if the information is available but is not being used, I put the question to you – why” and I believe this strongly relates as to why people are the most difficult aspect of business. I think being open to change is a huge obstacle that needs to be overcome by individuals in businesses today. I agree that change is scary and often requires a lot of preparation before it can be implemented, but the result could… END_OF_DOCUMENT_TOKEN_TO_BE_REPLACED

I really enjoyed reading the post on the value of people in a business and the difficulty associated with managing different personalities and skills. I particularly enjoyed the discussion on empathy as one of the most special and important gifts of our brain. I believe that empathy is an aspect of the human condition that affects so many aspects of social relationships, and can completely dictate the way we feel about someone, how we receive and react to them, and in the context of a busines… END_OF_DOCUMENT_TOKEN_TO_BE_REPLACED

Rarely does a truly inspirational business leader come along who has achieved phenomenal success by challenging traditional thinking and is committed to sharing what he has learned with others – to improve business and the world. All too often organizations operate in cultures where tradition is revered and powerful systems prevent innovation from occurring. Yet both business and education are at a tipping point; mainstream practices are simply not sustainable – it must change.  Successful leade… END_OF_DOCUMENT_TOKEN_TO_BE_REPLACED

The blog post “The Most Difficult Aspect of Business is People” is a very good read and I think most if not all business owners should read it. I completely agree with the author’s thoughts about empathy. I think that most individuals tend to categorize sensitivity and the ability to understand and share feelings with weakness, therefore this always leads to there being “that guy” in most businesses. I believe that businesses that show more empathy have greater chances of success as it improves… END_OF_DOCUMENT_TOKEN_TO_BE_REPLACED