Hooked on Hedonics: Is Happiness the next Holy Grail of Business? 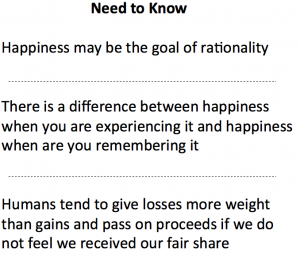 “Sixty minutes of thinking of any kind is bound to lead to confusion and unhappiness.” – James Thurber

There are two things I admire in a person.

Dan Kahneman, Nobel Prize winning author of “Thinking, Fast and Slow,” and featured expert in our “Freaking out about the guy who the ‘Freakonomics’ guy freaks out about” post gets the yet-to-be-named Kirchner Group equivalent of the Nobel Prize for having done both. (I know, safe move on my part given the, himself famous Steven Pinker, has said Kahneman “revolutionized large parts of psychology.”)

The “psychology of stupidity”

When Kahneman started his work, the accepted wisdom was people are rational. When they don’t act rational it is because of emotions. In contrast, his research showed several errors are baked into our (two aspects) cognitive process. Kahneman showed people are neither completely rational nor selfish. 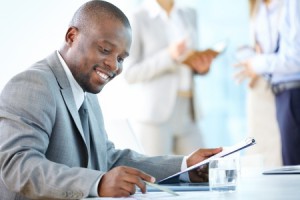 There is even an anecdote (that he told the New York Times after winning the 2002 Nobel Prize in Economics) about a prominent philosopher dissed his work as “psychology of stupidity” (I wonder where this guy displays his Nobel Prize?).

As he entered the current phase of his work (with all due respect to Dr. Kahneman, I am going to lump “hedonic psychology” in with the better publicized school of “positive psychology”) there was still modest support for the importance of positive psychology. In some circles it was considered counterintuitive.

Again, he has done pioneering work on hedonic psychology – the nature, cause and perception of happiness.

Picking up where we left off last post– here are the next two (collective) categories and some takeaways.

Would you give up financial gains if you didn’t receive a fair share?

Let me set the stage by saying a paper by Kahneman and Tversky, titled “Prospect Theory: An Analysis of Decision Under Risk,” is the most cited paper to appear in the academic (my emphasis) journal Econemerica. In other words, this is heavy (mathematical) stuff.  So here’s a concise (usable) summary for we business people.

Is happiness the new Holy Grail?

“It’s a kind of spiritual snobbery that makes people think they can be happy without money.” ~ Albert Camus

Kahneman seems to see happiness as the goal of rationality. However – what I find most fascinating is his research showing there is a difference (my emphasis) between happiness when you are experiencing it and when you are remembering it. The latter is more relevant.

In a business context, understanding how to (at least empirically) understand issues like the average household income that provides “happiness” can make or break a company. There are practical implications when you are trying to build a personal and corporate culture. Basically, you are assuming where people are content, in terms of earnings, thus stimulating creativity and innovation.

Before closing – I refer you to previously cited work by Martin Seligman (and others) in this burgeoning area.  I predict “positive psychology” could become one of the hottest areas as it relates to performance – I see it as becoming the Holy Grail of every businessperson.

Seligman has even coined a more descriptive word for this state: ‘eudemonia.’ He describes that as a dimension – the pleasant life, the good life and the meaningful life.

So what do you think? Does loss aversion, relative positioning and conservation show people are not always irrational or selfish? Am I correct by envisioning happiness as the new business Holy Grail or am I exhibiting some thinking errors? Let me know what you think.

In the “Business vs. Science: Are you losing this fight” blog, Bud’s main question is “if the information is available but is not being used, I put the question to you – why” and I believe this strongly relates as to why people are the most difficult aspect of business. I think being open to change is a huge obstacle that needs to be overcome by individuals in businesses today. I agree that change is scary and often requires a lot of preparation before it can be implemented, but the result could… END_OF_DOCUMENT_TOKEN_TO_BE_REPLACED

Rarely does a truly inspirational business leader come along who has achieved phenomenal success by challenging traditional thinking and is committed to sharing what he has learned with others – to improve business and the world. All too often organizations operate in cultures where tradition is revered and powerful systems prevent innovation from occurring. Yet both business and education are at a tipping point; mainstream practices are simply not sustainable – it must change.  Successful leade… END_OF_DOCUMENT_TOKEN_TO_BE_REPLACED

“Thank you! This article (How To Exercise Your Decision Making Muscle) helped me close a deal over weekend! We had been working with an investment bank to get investment done in a client’s company for a long, long time. I used many tactics from the article including ‘go / no go date, analysis paralysis explanation and using imagination to see opportunity in a new light – I even gave a copy of the article to the banker. It was extremely timely and helpful – I ought to give you some of the commiss… END_OF_DOCUMENT_TOKEN_TO_BE_REPLACED

The Business Brain Model  occupies a special niche, bringing together decades of experience across a very wide range of business and finance with an extraordinarily in-depth knowledge of the interface of neuroscience and psychology, including the latest developments in those fast-changing domains. This provides a singular insight into how these disciplines interact, and how recent developments in brain science can have a dramatic effect on business success. Bud’s writings should be required re… END_OF_DOCUMENT_TOKEN_TO_BE_REPLACED

“I’ve enjoyed the erudition of your written work, especially your piece on “Laughter In The Workplace”; wherein you gingerly skip from Plato, Aristotle, Hobbes, and Descartes over to Kant and Schopenhauer, (by way of Freud and Spencer) with Abe Lincoln added for good measure. Each individual in your pantheon, especially lately, Kant, has provided important guideposts along the way for my own growth. I particularly appreciated your Laughter piece because it helped me to smile and be more light-he… END_OF_DOCUMENT_TOKEN_TO_BE_REPLACED

The blog post “The Most Difficult Aspect of Business is People” is a very good read and I think most if not all business owners should read it. I completely agree with the author’s thoughts about empathy. I think that most individuals tend to categorize sensitivity and the ability to understand and share feelings with weakness, therefore this always leads to there being “that guy” in most businesses. I believe that businesses that show more empathy have greater chances of success as it improves… END_OF_DOCUMENT_TOKEN_TO_BE_REPLACED

I really enjoyed reading the post on the value of people in a business and the difficulty associated with managing different personalities and skills. I particularly enjoyed the discussion on empathy as one of the most special and important gifts of our brain. I believe that empathy is an aspect of the human condition that affects so many aspects of social relationships, and can completely dictate the way we feel about someone, how we receive and react to them, and in the context of a busines… END_OF_DOCUMENT_TOKEN_TO_BE_REPLACED