Positioning Between the Poles: Is right really right and wrong really wrong? 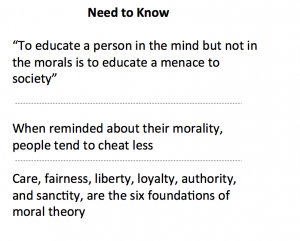 “It is helpful to think of people as having two fundamental motivations: the desire to see ourselves as honest, good people, and the desire to gain the benefits that come from cheating – on our taxes or on the football field.” ~ Dan Ariely

Given the holistic nature of the Business Brain Model and given this is a good way to illustrate where new ideas come from (Spoiler Alert: watch for articles on innovation), I want you to consider two polar positions and I encourage you to focus on the area in the middle. Simply put – here are two poles: which pulls you harder?

First, let me direct you to pole #1, which is based on a new book:

“To educate a person in the mind but not in morals is to educate a menace to society.” ~ Theodore Roosevelt 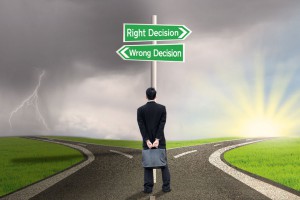 By its own description “Straight to Hell” delves deep inside an industry that is both envied and reviled and brazenly pulls back the curtain on the deviant and absolutely excessive world of finance.

There are a couple reasons why I could easily have decided not to mention this book. First and foremost, I have many friends and colleagues involved in the finance industry that do not fit this profile. Also – It appears to me it was written to create a sensational (biased?) picture.

However, many sources think it is a reasonable picture of what goes on. For example:

“There’s no question that [LeFevre] knows his way around the business, and it’s a dirty one. There’s collusion, competition, nepotism, and a whole lot of reprehensible stuff going on in the business side, and it’s fascinating. . . . A great read.”—Business Insider

“In some memoirs, the author tries to pull back the curtain to provide a glimpse into a particular time and place, but LeFevre attempts to rip the drapes right off. He gives a naked look at how business in the world of finance is conducted. LeFevre . . . doesn’t shy away from witnessing and partaking in some of the seedier antics . . . You may not like LeFevre’s tact, but he knows what he’s talking about.”—CNBC

Here are some illustrative one liner’s that reflect (in the writers mind at least) the code of (e.g.) Wall Street: (Just to be clear the words are LeFevre’s, the format is mine.)

LeFevre: On Being Fairness

LeFevre: On Having Money

In sharp contrast, I direct your attention to the “moral foundations theory” (much of what I will share with you can be found on MoralFoundations.org which is run by social psychologists), which is a combined social and psychological theory that describes the origins and variation in human moral reasoning. Psychologists Jonathan Haidt and Craig Joseph proposed the theory adding on to original work by cultural anthropologist Richard Shweder. The theory was popularized in Haidt’s book titled “The Righteous Mind.”

As with the LeFevre book there were pros and cons of “The Righteous Mind.”.  In the latter category, this is one of these quicksand issues that fuels endless debates involving psychologists and philosophers. On the other hand I wanted a context for readers to consider point/counterpoint.

“Waste no more time arguing about what a good man should be. Be one.” ~ Marcus Aurelius

The following are the so called six foundations of moral theory including values and their opposites:

So – as promised I have presented two diametrically opposed views of the world. I encourage you to reflect on your career and life and consciously allow yourself to be attracted by one pole and repulsed by the other.

Which Pole Are You Attracted To?

One person who has given a lot of thought to this question of morality and how we position ourselves between the ‘poles’ I have just described, is Dan Ariely who sees this as a manifestation of (predictable) irrationality.

I direct you to “Our buggy moral code” – Dan Ariely – TED Talk.

One of the fascinating aspects of Ariely’s work to me is the fact that right and wrong has no clear demarcation in action. It seems to be an ‘operational definition.’

The salient points of his research around the moral code – are illustrated by cheating. Here I quote his summary:

Ariely illustrates the inherent problem via the stock market – what better metaphor?

“What happens when you do other things, like you remove things from money? You call them stock, or stock options, derivatives, mortgage-backed securities. Could it be that with those more distant things, it’s not a token for one second, it’s something that is many steps removed from money for a much longer time — could it be that people will cheat even more? And what happens to the social environment when people see other people behave around them? I think all of those forces worked in a very bad way in the stock market.”

In closing, I can only point out the obvious – while (hopefully) business people choose to avoid the LeFevre pole they (depending on circumstances) don’t always make it to the Haidt pole. Somehow neuroscience and psychology dictates they sometimes fall short.

So which pole attracts you most? And why? I’d love to hear what pulls at your brain and your heart and if that pull is the same.

The Business Brain Model  occupies a special niche, bringing together decades of experience across a very wide range of business and finance with an extraordinarily in-depth knowledge of the interface of neuroscience and psychology, including the latest developments in those fast-changing domains. This provides a singular insight into how these disciplines interact, and how recent developments in brain science can have a dramatic effect on business success. Bud’s writings should be required re… END_OF_DOCUMENT_TOKEN_TO_BE_REPLACED

Rarely does a truly inspirational business leader come along who has achieved phenomenal success by challenging traditional thinking and is committed to sharing what he has learned with others – to improve business and the world. All too often organizations operate in cultures where tradition is revered and powerful systems prevent innovation from occurring. Yet both business and education are at a tipping point; mainstream practices are simply not sustainable – it must change.  Successful leade… END_OF_DOCUMENT_TOKEN_TO_BE_REPLACED

In the “Business vs. Science: Are you losing this fight” blog, Bud’s main question is “if the information is available but is not being used, I put the question to you – why” and I believe this strongly relates as to why people are the most difficult aspect of business. I think being open to change is a huge obstacle that needs to be overcome by individuals in businesses today. I agree that change is scary and often requires a lot of preparation before it can be implemented, but the result could… END_OF_DOCUMENT_TOKEN_TO_BE_REPLACED

“Thank you! This article (How To Exercise Your Decision Making Muscle) helped me close a deal over weekend! We had been working with an investment bank to get investment done in a client’s company for a long, long time. I used many tactics from the article including ‘go / no go date, analysis paralysis explanation and using imagination to see opportunity in a new light – I even gave a copy of the article to the banker. It was extremely timely and helpful – I ought to give you some of the commiss… END_OF_DOCUMENT_TOKEN_TO_BE_REPLACED

I really enjoyed reading the post on the value of people in a business and the difficulty associated with managing different personalities and skills. I particularly enjoyed the discussion on empathy as one of the most special and important gifts of our brain. I believe that empathy is an aspect of the human condition that affects so many aspects of social relationships, and can completely dictate the way we feel about someone, how we receive and react to them, and in the context of a busines… END_OF_DOCUMENT_TOKEN_TO_BE_REPLACED

“I’ve enjoyed the erudition of your written work, especially your piece on “Laughter In The Workplace”; wherein you gingerly skip from Plato, Aristotle, Hobbes, and Descartes over to Kant and Schopenhauer, (by way of Freud and Spencer) with Abe Lincoln added for good measure. Each individual in your pantheon, especially lately, Kant, has provided important guideposts along the way for my own growth. I particularly appreciated your Laughter piece because it helped me to smile and be more light-he… END_OF_DOCUMENT_TOKEN_TO_BE_REPLACED

The blog post “The Most Difficult Aspect of Business is People” is a very good read and I think most if not all business owners should read it. I completely agree with the author’s thoughts about empathy. I think that most individuals tend to categorize sensitivity and the ability to understand and share feelings with weakness, therefore this always leads to there being “that guy” in most businesses. I believe that businesses that show more empathy have greater chances of success as it improves… END_OF_DOCUMENT_TOKEN_TO_BE_REPLACED