“In fact, the only sin which we never forgive in each other is difference of opinion.” – Ralph Waldo Emerson

Decision making, as it relates to management, is perhaps the most ubiquitous issue in business. The challenge of groupthink is one of those ‘problems’ you don’t hear much about these days.  Is it possible that we threw the baby out with the bath water?

Just to be clear about terminology, groupthink is a phenomenon whereby individuals within a group strive for consensus to the extent they set aside their personal opinions and, in some cases, ‘inconsistent’ facts. While there is appeal (especially in a business context) for fast, “orderly”, “efficient” decisions, the trade-off can outweigh the benefits.

Two well-known generally accepted examples of groupthink’s negative aspects in action (or lack of the same) are the Challenger Space Shuttle Disaster and The Bay of Pigs Invasion. Needless to say, many others have been attributed to groupthink.

“A ‘No’ uttered from the deepest conviction is better than a ‘Yes’ merely uttered to please, or worse, to avoid trouble.” – Mahatma Gandhi

“A sect or party is an elegant incognito devised to save a man from the vexation of thinking.” – Ralph Waldo Emerson

“Teams are capable of being much more effective than individuals but, when groupthink sets in, the opposite can be true.” (www.mindtools.com)

Let’s take a step back: the early (and still relevant) classics are:

Janis did a great job of identifying the “symptoms” which I have tried to interpret in a business sense:

Illusion of invulnerability: Bravado that leads to bad decisions

Collective rationalization: Dismissing information that does not support the common idea

Belief in inherent morality: Believing yours is a righteous mission blinds you to consequences

Stereotyped views of out-groups: Believing anyone who does not agree with you is bad

Direct pressure on dissenters: Creating an environment where being a dissenter is a career limiting role

Self-censorship: Intimidation whether it is self or crowd induced is counterproductive

Illusion of unanimity: Struggling to get the magic moment when “all agree”

Self-appointed ‘mind guards’: In extreme form (perhaps because it would be a career limiting move) individuals withhold contrary info

As always, there are critics. “Janis develops his model by looking at major past policy decisions. An additional concern mentioned in the research is the derogatory use of the groupthink term as a way to criticize decisions that may not, in reality, be faulty.” (Groupthink theory and its implications for group decision making methods) The issues here relate to predictive/casual nature.

At our firm (Kirchner Group), we rely on a gross (but effective) over simplification.  If two partners see things exactly the same, then one is unnecessary. After some years, we came across a more articulate version offered by General Patton.

“If everyone is thinking alike, then somebody isn’t thinking.” – George S. Patton 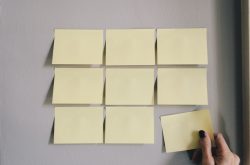 However, there are numerous more ‘formal’ guidelines that have been proposed. The following are ideas I have seen over the years plus some that have evolved at our group:

“The important thing about groupthink is that it works not so much by censoring dissent as by making dissent seem somehow improbable.” – James Surowiecki

In closing I recommend a particularly well-done treatment of this topic that can be found in Chapter 7 of Originals: How Non-conformists Move the World by Adam Grant.

“For it is dangerous to attach one’s self to the crowd in front, and so long as each one of us is more willing to trust another than to judge for himself, we never show any judgment in the matter of living, but always a blind trust and a mistake that has been passed on from hand to hand finally involves us and works our destruction.” – Seneca

“Thank you! This article (How To Exercise Your Decision Making Muscle) helped me close a deal over weekend! We had been working with an investment bank to get investment done in a client’s company for a long, long time. I used many tactics from the article including ‘go / no go date, analysis paralysis explanation and using imagination to see opportunity in a new light – I even gave a copy of the article to the banker. It was extremely timely and helpful – I ought to give you some of the commiss… END_OF_DOCUMENT_TOKEN_TO_BE_REPLACED

Rarely does a truly inspirational business leader come along who has achieved phenomenal success by challenging traditional thinking and is committed to sharing what he has learned with others – to improve business and the world. All too often organizations operate in cultures where tradition is revered and powerful systems prevent innovation from occurring. Yet both business and education are at a tipping point; mainstream practices are simply not sustainable – it must change.  Successful leade… END_OF_DOCUMENT_TOKEN_TO_BE_REPLACED

The Business Brain Model  occupies a special niche, bringing together decades of experience across a very wide range of business and finance with an extraordinarily in-depth knowledge of the interface of neuroscience and psychology, including the latest developments in those fast-changing domains. This provides a singular insight into how these disciplines interact, and how recent developments in brain science can have a dramatic effect on business success. Bud’s writings should be required re… END_OF_DOCUMENT_TOKEN_TO_BE_REPLACED

The blog post “The Most Difficult Aspect of Business is People” is a very good read and I think most if not all business owners should read it. I completely agree with the author’s thoughts about empathy. I think that most individuals tend to categorize sensitivity and the ability to understand and share feelings with weakness, therefore this always leads to there being “that guy” in most businesses. I believe that businesses that show more empathy have greater chances of success as it improves… END_OF_DOCUMENT_TOKEN_TO_BE_REPLACED

I really enjoyed reading the post on the value of people in a business and the difficulty associated with managing different personalities and skills. I particularly enjoyed the discussion on empathy as one of the most special and important gifts of our brain. I believe that empathy is an aspect of the human condition that affects so many aspects of social relationships, and can completely dictate the way we feel about someone, how we receive and react to them, and in the context of a busines… END_OF_DOCUMENT_TOKEN_TO_BE_REPLACED

In the “Business vs. Science: Are you losing this fight” blog, Bud’s main question is “if the information is available but is not being used, I put the question to you – why” and I believe this strongly relates as to why people are the most difficult aspect of business. I think being open to change is a huge obstacle that needs to be overcome by individuals in businesses today. I agree that change is scary and often requires a lot of preparation before it can be implemented, but the result could… END_OF_DOCUMENT_TOKEN_TO_BE_REPLACED

“I’ve enjoyed the erudition of your written work, especially your piece on “Laughter In The Workplace”; wherein you gingerly skip from Plato, Aristotle, Hobbes, and Descartes over to Kant and Schopenhauer, (by way of Freud and Spencer) with Abe Lincoln added for good measure. Each individual in your pantheon, especially lately, Kant, has provided important guideposts along the way for my own growth. I particularly appreciated your Laughter piece because it helped me to smile and be more light-he… END_OF_DOCUMENT_TOKEN_TO_BE_REPLACED