Gut Check: Do You Know What’s in Yours? Body & Brain Part 4 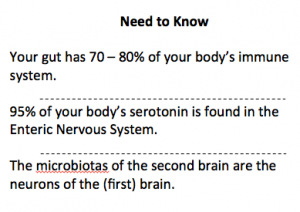 “Death begins in the colon.” – Most agree that statement comes from a Russian scientist, Élie Metchnikoff, who won The Nobel Prize in Physiology or Medicine 1908. If nothing else, it highlights (in a macabre fashion I admit) the importance of the gut, or second brain, which is dependent on microbiota.

While most of the content herein is arguably outside the realm of my typical posts – when possible I try to respond to inbound requests.  Specifically, the genesis of this series is because people have noted in various passing references the gut, its microbiota and its role related to health, I’ve been asked to expand on that topic.

What’s In It For You? 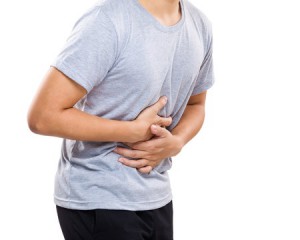 Before I try to share anything – let’s be clear I am not qualified to give medical advice (in fact there are days I question my ability to give advice on business matters). However, I have read extensively and (like most successful business people) I have a pretty good BS detector so with those credentials in mind here is what you will find in this post:

And now – a bit of editorial comment: If there was any indication the microbiome world needs a better press agent. Think about this: Everybody has heard of the Human Genome Project. But who amongst us have even heard of the “Human Microbiome Project?” Turns out that project is also sponsored by the NIH (National Institutes of Health) – apparently, there are some smart people who think this is a mission critical area.  If you visit the HMP’s website and look at the Overview webpage you will see it “was established with the mission of generating research resources enabling comprehensive characterization of the human microbiota and analysis of their role in human health and disease.”

With all that said, in order to paint a picture for the layman (including me) I ask you to think of this analogy: the microbiotas of the second brain are the neurons of the (first) brain (Neuroscientists and endocrinologists around the world are cringing.)

Clearly, the two at the head of the pack are Michael Gershon, M.D., and David Perlmutter, M.D. You can find more descriptors  about Perlmutter in “Did You Know You Had Two Brains?” and about Gershon in “Is Your Gut the Most Important Part of Your Brain?”

A few other books that I think would be useful and that I have used to various degrees:

Here are some additional contexts for thinking about the gut/microbiota and health. I’ve extracted them from the named source and categorized to a small degree. I’ve only included a few for illustration.

Physiology: There is ample (and growing) evidence of the role of microbiota in areas such as immune systems detoxification, inflammation, neurotransmitter genesis and vitamin production, nutrient absorption, satiety and metabolism including carbohydrates and fat.

Behavior: You can alter behavior by exchanging (mice) gut microbiota.  Scientists transplanted microbes from a timid group of mice into the guts of risk-taking mice and vice versa. The results saw the shy mice became outgoing, the brazen mice became apprehensive.

Therapeutics: Researchers are exploring the treatment of anxiety, depression and autism through the gut. They believe drug delivery is easier to target in the gut than the brain.

Microbes help maintain immune system balance. When it is severely out of balance you get responses such as anaphylactic shock. (We’ve discussed earlier the impact of chronic inflammation and performance.)

Gut microbes make active components such as neurotransmitters and metabolites that act on the brain. (We’ve discussed earlier the role of emotions in decision-making and communication.)

Author’s Note: I have a very deep (personal) interest in the lives of children with special needs.

I noticed a study conducted by scientists at the University of Pennsylvania that said stress to a mother during her first trimester of pregnancy changes her microbiome. It said “those changes are passed on to newborns during birth and are associated with differences in their gut microbiome as well as their brain development.” And that will have a lifetime effect on a child’s health and wellbeing.

Autism Speaks, one of the leading advocacy programs, says “growing evidence links a dysfunction in this GABA (Gamma-amino butyric acid) system to aspects of autism.” I have also seen references to deficiencies in GABA, the brain’s top inhibitory neurotransmitter, causing ADHD.

Taking this one step further, a New York Times Magazine article in June 2015 titled “Can the Bacteria in Your Gut Explain Your Mood?” quotes Sarkis Mazmanian, Ph.D., a microbiologist with the California Institute of Technology as saying, “The larger concept is, and this is pure speculation: Is a disease like autism really a disease of the brain or maybe a disease of the gut or some other aspect of physiology?”

In 2012, a collaboration of researchers from Autism Centers at the University of Missouri – Columbia, Johns Hopkins University and Children’s Hospital of Cincinnati published an article in the Journal of Abnormal Psychology that linked GI problems and behavioral problems in children with autism. It was the first study of its kind to be published, and as an article in The Atlantic points out, they found “a common cause of autistic children acting out is simply because they’re constipated.”

Simply put by me – do we know what we are feeding our children and ourselves? I’m not recommending you go Paleo, or Feingold, or Vegan, or Juice Cleanse or whatever else is out there. I’m just saying we should all be conscious of things like Butylated Hydroxyanisole (BHA), Red #40, Propyl Gallate, Yellow #5 and Sodium Benzoate. And while Bromate may sound like a new catch phrase from a Rom-Com movie, Potassium Bromate “has been banned by every other industrialized country other than the U.S. and Japan.” (BTW – it’s an additive in breads you probably eat.)

So please – use your first brain to protect your second brain.

For anyone who wants to still dive deeper – here are some resources that have been useful for me.

“By controlling the environment of the stomach, we can control what happens in the brain.” ~ Kirsten Tillisch

We have covered a lot in this series. And there is still more to uncover. I am not sure I’ve identified any magic bullet (or magic arrow) but I hope that so far in this series I have been able to point you to the target area.

In the “Business vs. Science: Are you losing this fight” blog, Bud’s main question is “if the information is available but is not being used, I put the question to you – why” and I believe this strongly relates as to why people are the most difficult aspect of business. I think being open to change is a huge obstacle that needs to be overcome by individuals in businesses today. I agree that change is scary and often requires a lot of preparation before it can be implemented, but the result could… END_OF_DOCUMENT_TOKEN_TO_BE_REPLACED

Rarely does a truly inspirational business leader come along who has achieved phenomenal success by challenging traditional thinking and is committed to sharing what he has learned with others – to improve business and the world. All too often organizations operate in cultures where tradition is revered and powerful systems prevent innovation from occurring. Yet both business and education are at a tipping point; mainstream practices are simply not sustainable – it must change.  Successful leade… END_OF_DOCUMENT_TOKEN_TO_BE_REPLACED

“Thank you! This article (How To Exercise Your Decision Making Muscle) helped me close a deal over weekend! We had been working with an investment bank to get investment done in a client’s company for a long, long time. I used many tactics from the article including ‘go / no go date, analysis paralysis explanation and using imagination to see opportunity in a new light – I even gave a copy of the article to the banker. It was extremely timely and helpful – I ought to give you some of the commiss… END_OF_DOCUMENT_TOKEN_TO_BE_REPLACED

The Business Brain Model  occupies a special niche, bringing together decades of experience across a very wide range of business and finance with an extraordinarily in-depth knowledge of the interface of neuroscience and psychology, including the latest developments in those fast-changing domains. This provides a singular insight into how these disciplines interact, and how recent developments in brain science can have a dramatic effect on business success. Bud’s writings should be required re… END_OF_DOCUMENT_TOKEN_TO_BE_REPLACED

“I’ve enjoyed the erudition of your written work, especially your piece on “Laughter In The Workplace”; wherein you gingerly skip from Plato, Aristotle, Hobbes, and Descartes over to Kant and Schopenhauer, (by way of Freud and Spencer) with Abe Lincoln added for good measure. Each individual in your pantheon, especially lately, Kant, has provided important guideposts along the way for my own growth. I particularly appreciated your Laughter piece because it helped me to smile and be more light-he… END_OF_DOCUMENT_TOKEN_TO_BE_REPLACED

The blog post “The Most Difficult Aspect of Business is People” is a very good read and I think most if not all business owners should read it. I completely agree with the author’s thoughts about empathy. I think that most individuals tend to categorize sensitivity and the ability to understand and share feelings with weakness, therefore this always leads to there being “that guy” in most businesses. I believe that businesses that show more empathy have greater chances of success as it improves… END_OF_DOCUMENT_TOKEN_TO_BE_REPLACED

I really enjoyed reading the post on the value of people in a business and the difficulty associated with managing different personalities and skills. I particularly enjoyed the discussion on empathy as one of the most special and important gifts of our brain. I believe that empathy is an aspect of the human condition that affects so many aspects of social relationships, and can completely dictate the way we feel about someone, how we receive and react to them, and in the context of a busines… END_OF_DOCUMENT_TOKEN_TO_BE_REPLACED