Happy Birth Year, Henry David! Thank You For the Gift

“Only that day dawns to which we are awake.” – Henry David Thoreau, Walden

As with most of the topics I write about I will eventually address the issue of the relevance to the world of business but for now let’s consider two quotes we will come back to: 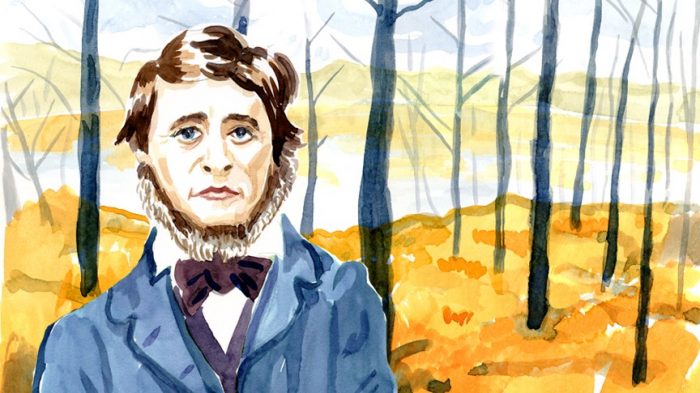 As the world acknowledges the 200th anniversary of the birth year of Henry David Thoreau, from many perspectives I choose to recognize him for his contributions to the world of mindfulness and therefore to the world of business. In other words on his birth year I am suggesting we celebrate the gift he gave us by sharing his ‘natural’ experiences.

Ralph Waldo Emmerson who was a friend and mentor introduced Thoreau to Walden Pond when he was 28 years old and where he stayed for about two years. The friendship and introduction was based on mutual interests in the philosophies of ancient India.

Thoreau was, of course, one member of the “eloquent” and popular transcendental triumvirate including him, Emmerson and Whitman.  However for the purposes of this article, it is his personal journey that is of most relevance.

Thoreau’s governing principle is captured in this quote from Pearson.

“The human soul, deep within, is divine, and that this divinity is to be found throughout nature.” – Henry David Thoreau – “We become like a still lake of purest crystal”

The message of Thoreau was that mindfulness can occur if we become aware of our surrounding. In the case of Walden Pond this involved the natural annual cycles of color, animals and plants or as in Pearson’s words:

“…, the fourth major state of consciousness, beyond waking, dreaming, and sleeping. This state Maharishi characterizes as “the simplest form of human awareness.” One’s mind settles inward, beyond perceptions and thoughts and feelings. Consciousness rests within itself, awake to itself alone, serene and unbounded, a silent ocean.”

In far less eloquent words the experience of Thoreau has been described as his sucking out the marrow of life.

All of this and more is documented in his book Walden published in 1854 and has been described as part personal declaration of independence, social experiment, voyage of spiritual discovery, satire, and manual for self-reliance. I, however, would describe it as a remarkable validation of mindfulness.

“You must live in the present, launch yourself on every wave, find your eternity in each moment.” – Henry David Thoreau

Staggering amount Thoreau’s thoughts are found in Wherever You Go, There You Are: Mindfulness Meditation In Everyday Life by Jon Kabat-Zinn. It is replete with references, anecdotes and quotes.

Clearly the author believes Thoreau was embracing the tenets of mindfulness.

Perhaps, the best indicator of the relevance of the Thoreau/Walden experience is his description “He chose to put his life on the line in order to revel in the wonder and simplicity of present moments.”

In Thoreau’s own words: 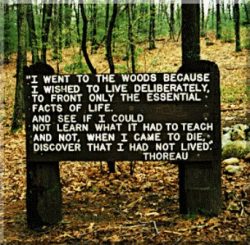 “I went to the woods because I wished to live deliberately, to front only the essential facts of life and see if I could not learn what it had to teach, and not, when I came to die, discover that I had not lived.”

And in those of Kabat-Zinn:

“It reeks of paradox.  The only way you can do anything of value is to have the effort come out of non-doing and to let go of caring whether it will be of use or not.  Otherwise, self-involvement and greediness can sneak in and distort your relationship to the work, or the work itself, so that it is off in some way, biased, impure, and ultimately not completely satisfying, even if it is good.  Good scientists (You can replace with businessperson) know this mind state and guard against it because it inhibits the creative process and distorts one’s ability to see connections clearly.”

Now to come full circle to the world of business:

“Leaders who are mindful tend to be more effective in understanding and relating to others, and in motivating them toward shared goals.  Hence, they become more effective in leadership roles.” – William George, Harvard Business School Professor and former Medtronic Chairman and CEO

I have written extensively about the positive impact of mindfulness on businesspersons.

I have also written directly on nature and the magic it represents.

Finally, I can offer up a personal endorsement. I have gone to great lengths to recreate and share (http://www.youtube.com/watch?v=BPYZ9I6Yqm0I) a modern day Walden Pond.

In closing, the first quote is from Lao Tzu and the second is from Thoreau.

In the “Business vs. Science: Are you losing this fight” blog, Bud’s main question is “if the information is available but is not being used, I put the question to you – why” and I believe this strongly relates as to why people are the most difficult aspect of business. I think being open to change is a huge obstacle that needs to be overcome by individuals in businesses today. I agree that change is scary and often requires a lot of preparation before it can be implemented, but the result could… END_OF_DOCUMENT_TOKEN_TO_BE_REPLACED

Rarely does a truly inspirational business leader come along who has achieved phenomenal success by challenging traditional thinking and is committed to sharing what he has learned with others – to improve business and the world. All too often organizations operate in cultures where tradition is revered and powerful systems prevent innovation from occurring. Yet both business and education are at a tipping point; mainstream practices are simply not sustainable – it must change.  Successful leade… END_OF_DOCUMENT_TOKEN_TO_BE_REPLACED

“Thank you! This article (How To Exercise Your Decision Making Muscle) helped me close a deal over weekend! We had been working with an investment bank to get investment done in a client’s company for a long, long time. I used many tactics from the article including ‘go / no go date, analysis paralysis explanation and using imagination to see opportunity in a new light – I even gave a copy of the article to the banker. It was extremely timely and helpful – I ought to give you some of the commiss… END_OF_DOCUMENT_TOKEN_TO_BE_REPLACED

The Business Brain Model  occupies a special niche, bringing together decades of experience across a very wide range of business and finance with an extraordinarily in-depth knowledge of the interface of neuroscience and psychology, including the latest developments in those fast-changing domains. This provides a singular insight into how these disciplines interact, and how recent developments in brain science can have a dramatic effect on business success. Bud’s writings should be required re… END_OF_DOCUMENT_TOKEN_TO_BE_REPLACED

“I’ve enjoyed the erudition of your written work, especially your piece on “Laughter In The Workplace”; wherein you gingerly skip from Plato, Aristotle, Hobbes, and Descartes over to Kant and Schopenhauer, (by way of Freud and Spencer) with Abe Lincoln added for good measure. Each individual in your pantheon, especially lately, Kant, has provided important guideposts along the way for my own growth. I particularly appreciated your Laughter piece because it helped me to smile and be more light-he… END_OF_DOCUMENT_TOKEN_TO_BE_REPLACED

The blog post “The Most Difficult Aspect of Business is People” is a very good read and I think most if not all business owners should read it. I completely agree with the author’s thoughts about empathy. I think that most individuals tend to categorize sensitivity and the ability to understand and share feelings with weakness, therefore this always leads to there being “that guy” in most businesses. I believe that businesses that show more empathy have greater chances of success as it improves… END_OF_DOCUMENT_TOKEN_TO_BE_REPLACED

I really enjoyed reading the post on the value of people in a business and the difficulty associated with managing different personalities and skills. I particularly enjoyed the discussion on empathy as one of the most special and important gifts of our brain. I believe that empathy is an aspect of the human condition that affects so many aspects of social relationships, and can completely dictate the way we feel about someone, how we receive and react to them, and in the context of a busines… END_OF_DOCUMENT_TOKEN_TO_BE_REPLACED