Is Your Gut the Most Important Part of Your Brain? Body & Brain Part 3 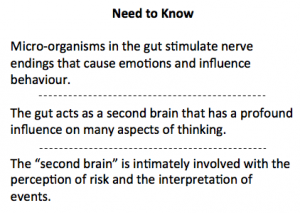 “My guest, Dr. Michael Gershon, believes we have a second brain in the gut. I’ll ask him where he thinks the first one is.” – Stephen Colbert on the Colbert Report

Let’s start with a 30,000 feet perspective of another brain now, and in the next post get into details. Incidentally, this should also provide additional context on our previous post titled “An Exercise in Risky Business.”

Who is in charge here? 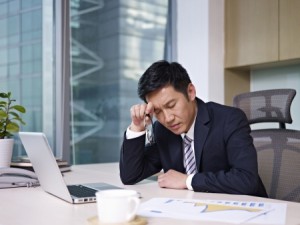 The areas of collaboration include several we have touched on in various contexts in previous posts (as they relate to the Business Brain Model context). They are (basic) memory, moods, decision making and behavior – including reactions.

While the ENS is clearly not involved in conscious thoughts such as abstract thinking, it is also clearly not solely focused on the movement of food and waste including chemical processing, physical churning and peristaltic movement. In what seems like some form of feedback system, the nervous system via its ability to effect gut transit time and the production of mucus can help dictate which microbes inhabit the gut with consequences we will discuss.

Your Gut Talks to Your Brain, Not Vice-Versa

“Gut microbes are part of the unconscious system influencing behavior.”

Micro-organisms in the gut stimulate nerve endings that cause emotions such as described in a previous post. An extensive network of neurons and a steady flow of chemicals and hormones (produced in the gut) provide feedback connecting your brain and your gut. The implications of this are clear!

Justin and Erica Sonnenburg, both Ph.D. researchers at Stanford University, authored the book “The Good Gut: Taking Control of Your Weight, Your Mood and Your Long-term Health.” In it they discuss the HPA (hypothalamic – pituitary – adrenal) axis. This is how the gut talks to the brain about hormones helping digestion.

Most interestingly, they look at the gut as an ecosystem with “competing species” where “the environment within the gut dictates which inhabitants thrive.” In other words – those with the most intestinal fortitude (I bet you saw that one coming) will survive.

All jokes aside, because we now know the vast majority of information travels from the gut to the brain – and not vice versa – there is a growing group of scientific researchers studying how your second brain works with your first brain and directly impacts your life.

In their paper titled “Reduced anxiety-like behavior and central neurochemical change in germ-free mice,” authors K. M. Neufeld, N. Kang, J. Bienenstock and J. A. Foster, who are researchers at the Brain-Body Institute in Canada, said, “We conclude that the presence or absence of conventional intestinal microbiota influences the development of behavior and is accompanied by neurochemical changes in the brain.”

A few specifics (these are expanded on) from Jane Foster, Ph.D., a Canadian researcher at McMaster University whose work has appeared in the journal Neurogastroenterology and Motility:

By way of expanding your horizons in this area in an easier to read format, I recommend a book by Michael Gershon, M.D., called “The Second Brain: A Groundreaking New Understanding of Nervous Disorders of the Stomach and Intestine.” Incidentally, Gershon is credited with discovering the second brain. In order to save you a bit of time here are some of the relevant facts.

We’ve all seen the brain but have we seen the (second) brain.

What’s a business-person to conclude?

Let’s leave it here since the last two points are already touching on our next post.

The Business Brain Model  occupies a special niche, bringing together decades of experience across a very wide range of business and finance with an extraordinarily in-depth knowledge of the interface of neuroscience and psychology, including the latest developments in those fast-changing domains. This provides a singular insight into how these disciplines interact, and how recent developments in brain science can have a dramatic effect on business success. Bud’s writings should be required re… END_OF_DOCUMENT_TOKEN_TO_BE_REPLACED

In the “Business vs. Science: Are you losing this fight” blog, Bud’s main question is “if the information is available but is not being used, I put the question to you – why” and I believe this strongly relates as to why people are the most difficult aspect of business. I think being open to change is a huge obstacle that needs to be overcome by individuals in businesses today. I agree that change is scary and often requires a lot of preparation before it can be implemented, but the result could… END_OF_DOCUMENT_TOKEN_TO_BE_REPLACED

The blog post “The Most Difficult Aspect of Business is People” is a very good read and I think most if not all business owners should read it. I completely agree with the author’s thoughts about empathy. I think that most individuals tend to categorize sensitivity and the ability to understand and share feelings with weakness, therefore this always leads to there being “that guy” in most businesses. I believe that businesses that show more empathy have greater chances of success as it improves… END_OF_DOCUMENT_TOKEN_TO_BE_REPLACED

Rarely does a truly inspirational business leader come along who has achieved phenomenal success by challenging traditional thinking and is committed to sharing what he has learned with others – to improve business and the world. All too often organizations operate in cultures where tradition is revered and powerful systems prevent innovation from occurring. Yet both business and education are at a tipping point; mainstream practices are simply not sustainable – it must change.  Successful leade… END_OF_DOCUMENT_TOKEN_TO_BE_REPLACED

“I’ve enjoyed the erudition of your written work, especially your piece on “Laughter In The Workplace”; wherein you gingerly skip from Plato, Aristotle, Hobbes, and Descartes over to Kant and Schopenhauer, (by way of Freud and Spencer) with Abe Lincoln added for good measure. Each individual in your pantheon, especially lately, Kant, has provided important guideposts along the way for my own growth. I particularly appreciated your Laughter piece because it helped me to smile and be more light-he… END_OF_DOCUMENT_TOKEN_TO_BE_REPLACED

I really enjoyed reading the post on the value of people in a business and the difficulty associated with managing different personalities and skills. I particularly enjoyed the discussion on empathy as one of the most special and important gifts of our brain. I believe that empathy is an aspect of the human condition that affects so many aspects of social relationships, and can completely dictate the way we feel about someone, how we receive and react to them, and in the context of a busines… END_OF_DOCUMENT_TOKEN_TO_BE_REPLACED

“Thank you! This article (How To Exercise Your Decision Making Muscle) helped me close a deal over weekend! We had been working with an investment bank to get investment done in a client’s company for a long, long time. I used many tactics from the article including ‘go / no go date, analysis paralysis explanation and using imagination to see opportunity in a new light – I even gave a copy of the article to the banker. It was extremely timely and helpful – I ought to give you some of the commiss… END_OF_DOCUMENT_TOKEN_TO_BE_REPLACED