What do your Mother, a Car Salesman and a Hare Krishna devotee have in Common 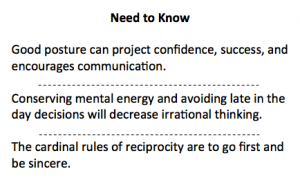 Answer: They all know more about aspects of the Business Brain Model than you do!

Is this possible given your years in business and/or your higher education? Simply put – yes.

“It takes considerable knowledge just to realize the extent of your own ignorance.” ~ Thomas Sowell

Let’s look at the facts:

“Men are what their mothers made them.” ~ Ralph Waldo Emerson

Who amongst us has not been told, “Stand up tall,” or “Don’t slouch” (in a maternal voice)? Are they striving for the pride of having the tallest child? Or do they (as always) know more than their children?  I have, of course, hinted at what is actually going on in previous articles titled “It’s Not What You Say, It’s How You Show It,” and “Did You Know You Have Two Brains?”

In fact, thanks to research from Amy Cuddy (Harvard University), Dana Carney and Andy Yap (both of Columbia University) titled “Power Posing: Brief Nonverbal Displays Affect Neuroendocrine Levels and Risk Tolerance,” we know that “high-power posers, experienced elevations in testosterone (20%), decreases in cortisol (25%) and increased feelings of power and tolerance for risk.”

In a business context, this leads to more confidence and a sense of being in charge – or in other words: enhanced likelihood of success beyond ones title or position.

Of course, this is a double winner – expansive posture can not only project the above internal feelings to those around you but it can create an ‘inviting’ physical space to encourage communication and relationship building.

“For must of us, though, the problem is not a lack of goals but rather too many of them.” ~ Roy F. Baumeister

Do you think car salesmen sit around and discuss “decision fatigue?” Incidentally, for the Freudians in the crowd, Baumeister, who co-authored “Ego Depletion: Is the Active Self a Limited Resource?” has termed this as “ego depletion.” So maybe this 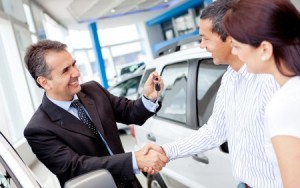 is how salesmen think about it?

In any event, they know (instinctive?) how to capitalize on “analysis paralysis.” They know (I assume empirically) that as your brain struggles to conserve energy (remember brain stats from my article “Arming Yourself in the Battle with Your Mind:” 2 percent of your body weight but 20 percent of your energy consumption) it will fatigue after decisions on mundane things like floor mats, colors and trim. Then (and only then) they will hit you with the big ticket decisions – carefully constructed so that the default decision costs more – and by definition earns them more.

Clearly, a bad decision (for you) but inevitable since we have a finite amount of energy for decision-making.

This phenomenon usually leads to irrational decision making which is manifested by the two extremes of impulsivity or lack of action!

In a business context – the message here is to avoid back-to-back meetings, late in the day decisions and multiple sequenced decisions. In other words: conserve mental energy. Certainly a theme we will touch on again in the next section.

Given we can’t always control the time of the meeting; the obvious anecdote when it comes to energy is food. Obvious, but John Tierney’s New York Times Magazine article, “Do You Suffer From Decision Fatigue?” reported on some interesting research: “Your brain does not stop working when glucose is low. It stops doing some things and starts doing others. It responds more strongly to immediate rewards and pays less attention to long-term prospects.” How scary is this when it comes to business decisions?!

Admittedly, there is a lot written on compassion and empathy (see my articles “Lessons Learned from Street People” and “Einfühlung”) in their purest forms.

So – when the Hare Krishna person approaches you chanting a mantra they will (unlike many ‘solicitations’) give you a flower or a verse that you will feel (subconsciously) inclined to reciprocate – as in “make a donation.” We know from the world of neuroscience/psychology that our instinctive tendency when someone gives us a gift is to return the gesture. An act so important that it is sometimes called the law of reciprocity.

Given most business people don’t ‘go begging’ (although there are days in the life of an entrepreneur…), what about the simple gesture of serving a colleague a cup of coffee? Surely that couldn’t influence their desire to reciprocate (cooperate) could it?

As always – I offer you some hard science to support my points. Feel free to check out “Neural Correlate of Human Reciprocity in Social Interactions,” by Shiro Sakaiya, Yuki Shiraito, Junko Kato, Hiroko Ide, Kensuke Okada, KoujiTakano and Kenji Kansaku published in Frontiers in Neuroscience on December 17, 2013.

In short, their work illustrates the left amygdala, the right middle dorsolateral prefrontal cortex and dorsal caudate, as well as the ventromedial prefrontal cortex (VMPFC and precuneus) are involved in reciprocity. They found “the intensity of emotion attached to human reciprocity was represented in the amygdala, whereas insight into the reciprocity of others was reflected in activation across the reward-related and ToM (theory of mind) regions.” In other words, multiple sections of your brain are all engaged and driving you to “return the favor.”

Surely, this much (brain) horsepower being involved validates the importance of reciprocity!

Incidentally, the cardinal rules regarding reciprocity are:

Thus illustrates the human aspect – you are building trust and rapport.

Back to the earlier theme, in the context of saving energy, reciprocity acts as a shortcut to decision making. You can imagine the relevance to business processes such as negotiations.

So – what is the point of this article?  Surely, I don’t want to feed the inherent (necessary) insecurity of business builders and managers. Nor do I propose Kirchner Group will start recruiting only mothers, Hare Krishna devotees and car salesmen for our management positions. (Although, I wouldn’t rule them out.)

Rather, I simply wanted to reinforce a couple premises of the Business Brain Model:

(1.) There are varied things we know from the world of neuroscience/psychology that business ignores and

(2.) they can have real (business) world benefits if you use them.

In the “Business vs. Science: Are you losing this fight” blog, Bud’s main question is “if the information is available but is not being used, I put the question to you – why” and I believe this strongly relates as to why people are the most difficult aspect of business. I think being open to change is a huge obstacle that needs to be overcome by individuals in businesses today. I agree that change is scary and often requires a lot of preparation before it can be implemented, but the result could… END_OF_DOCUMENT_TOKEN_TO_BE_REPLACED

Rarely does a truly inspirational business leader come along who has achieved phenomenal success by challenging traditional thinking and is committed to sharing what he has learned with others – to improve business and the world. All too often organizations operate in cultures where tradition is revered and powerful systems prevent innovation from occurring. Yet both business and education are at a tipping point; mainstream practices are simply not sustainable – it must change.  Successful leade… END_OF_DOCUMENT_TOKEN_TO_BE_REPLACED

“Thank you! This article (How To Exercise Your Decision Making Muscle) helped me close a deal over weekend! We had been working with an investment bank to get investment done in a client’s company for a long, long time. I used many tactics from the article including ‘go / no go date, analysis paralysis explanation and using imagination to see opportunity in a new light – I even gave a copy of the article to the banker. It was extremely timely and helpful – I ought to give you some of the commiss… END_OF_DOCUMENT_TOKEN_TO_BE_REPLACED

The Business Brain Model  occupies a special niche, bringing together decades of experience across a very wide range of business and finance with an extraordinarily in-depth knowledge of the interface of neuroscience and psychology, including the latest developments in those fast-changing domains. This provides a singular insight into how these disciplines interact, and how recent developments in brain science can have a dramatic effect on business success. Bud’s writings should be required re… END_OF_DOCUMENT_TOKEN_TO_BE_REPLACED

“I’ve enjoyed the erudition of your written work, especially your piece on “Laughter In The Workplace”; wherein you gingerly skip from Plato, Aristotle, Hobbes, and Descartes over to Kant and Schopenhauer, (by way of Freud and Spencer) with Abe Lincoln added for good measure. Each individual in your pantheon, especially lately, Kant, has provided important guideposts along the way for my own growth. I particularly appreciated your Laughter piece because it helped me to smile and be more light-he… END_OF_DOCUMENT_TOKEN_TO_BE_REPLACED

The blog post “The Most Difficult Aspect of Business is People” is a very good read and I think most if not all business owners should read it. I completely agree with the author’s thoughts about empathy. I think that most individuals tend to categorize sensitivity and the ability to understand and share feelings with weakness, therefore this always leads to there being “that guy” in most businesses. I believe that businesses that show more empathy have greater chances of success as it improves… END_OF_DOCUMENT_TOKEN_TO_BE_REPLACED

I really enjoyed reading the post on the value of people in a business and the difficulty associated with managing different personalities and skills. I particularly enjoyed the discussion on empathy as one of the most special and important gifts of our brain. I believe that empathy is an aspect of the human condition that affects so many aspects of social relationships, and can completely dictate the way we feel about someone, how we receive and react to them, and in the context of a busines… END_OF_DOCUMENT_TOKEN_TO_BE_REPLACED