A Field Guide to Nonverbal Communications 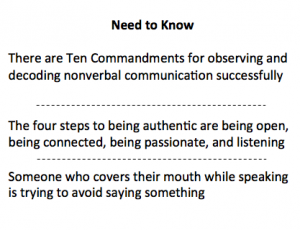 “The single biggest problem in communication is the illusion that it has taken place.” George Bernard Shaw

In an earlier post from a series on “Thinking Errors,” I introduced the concept of a ‘field guide’ analogy regarding certain principles, facts, etc. My idea is to provide enough detail in an easy to follow manner that you will recognize key items in your everyday business life. Occasionally, you will still need to do a bit of work to further classify and better personalize material. Once again, I will use this approach here.

A Quick Caveat (or three)

This is not intended to be a definitive (nor dare I say academic or scientific) description. In the words of someone who tries to use this stuff every day in the real world – of business – I am sharing what seems to be the Goldilocks bowl. 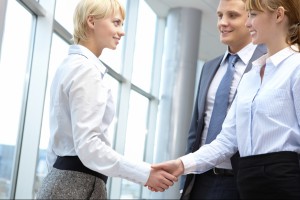 This is not foolproof but if nothing else they will heighten your sensitivity to nonverbal signals. I encourage you to review the previous post – at least the section on qualifiers that could contradict or reinforce what you think you are hearing/seeing.

What follows now are some simple illustrations of nonverbal ‘communication.’ Note: I am keeping the big one (smile) until the next post.

I have become intrigued by a couple broader stroke concepts regarding nonverbal communication which is where I will begin. While they are each applicable to both inbound and outbound messaging I present them here mostly in the context of delivering a convincing (nonverbal) message.

No – not those Ten Commandments. I’m referring to some general guidelines from “What Every BODY is Saying,” by Joe Navarro. Guidelines he calls “The Ten Commandments for Observing and Decoding Nonverbal Communications Successfully.”

I have taken the liberty of underlining what I believe is the key word.

No – not those planes. I’m talking about the work of Mark Bowden. His book “Winning Body Language” covers several aspects of nonverbal communication.  Bowden has a background in theatre and other related areas so he is focused on (but not limited to) gestures – as he described in “the GesturePlane system.”

At this point I think the gestures idea is well worth our time. As he explains it:

“The key tenet of the GesturePlane system is that the feeling evoked by a verbal message can be radically and predictably changed in the performer and the perceiver by simply (amongst other things) the horizontal height at which the performer holds their hands.”

With this in mind he divides the body, starting at the head and descending to the feet, into six planes. Keep in mind – this refers to where the hands are during interactions and the message being sent.

Finally, some ideas from “Trust Me: Four Steps to Authenticity and Charisma,” by Nick Morgan. The basic principle is: at the subconscious level, gestures register first and our limbic brain tells us if that person is authentic and believable

Morgan developed a four step approach based on that belief so it makes sense to create the intention of your communication first – then the gesture will appear naturally. That will be followed by your thoughts and finally your actual words. Your focus objective is to get verbal and nonverbal in sync.

The three examples above (Commandments, Planes and Steps) illustrate categories of information (under the umbrella of our Business Brain Model℠) that needs to be leveraged to be effective in nonverbal communication.

Below is a series of nonverbal signals that are not intended to reveal some incredible ‘tell’ that will enable you to pick up on a simple signal and make a monumental interpretation on another’s thoughts. Rather, I hope that you become more aware of the signals you are sending and are sensitive to the signals others are sending you.

These are some cues I have seen in negotiations and deal making. Subsequent events confirmed my interpretation. Validation may be too strong a word, but nevertheless, these are the ones I’ve come to rely on during my extensive career with Kirchner Group.

One final note, a good source of photos on nonverbal messages (and an illustration of how limited my list is) see the aforementioned book by Joe Navarro.

In closing (and by way of reinforcement), I am not suggesting you don’t do business with someone who rubs their nose – I am only suggesting you spend a bit more time validating their honesty.

The Business Brain Model  occupies a special niche, bringing together decades of experience across a very wide range of business and finance with an extraordinarily in-depth knowledge of the interface of neuroscience and psychology, including the latest developments in those fast-changing domains. This provides a singular insight into how these disciplines interact, and how recent developments in brain science can have a dramatic effect on business success. Bud’s writings should be required re… END_OF_DOCUMENT_TOKEN_TO_BE_REPLACED

Rarely does a truly inspirational business leader come along who has achieved phenomenal success by challenging traditional thinking and is committed to sharing what he has learned with others – to improve business and the world. All too often organizations operate in cultures where tradition is revered and powerful systems prevent innovation from occurring. Yet both business and education are at a tipping point; mainstream practices are simply not sustainable – it must change.  Successful leade… END_OF_DOCUMENT_TOKEN_TO_BE_REPLACED

In the “Business vs. Science: Are you losing this fight” blog, Bud’s main question is “if the information is available but is not being used, I put the question to you – why” and I believe this strongly relates as to why people are the most difficult aspect of business. I think being open to change is a huge obstacle that needs to be overcome by individuals in businesses today. I agree that change is scary and often requires a lot of preparation before it can be implemented, but the result could… END_OF_DOCUMENT_TOKEN_TO_BE_REPLACED

“Thank you! This article (How To Exercise Your Decision Making Muscle) helped me close a deal over weekend! We had been working with an investment bank to get investment done in a client’s company for a long, long time. I used many tactics from the article including ‘go / no go date, analysis paralysis explanation and using imagination to see opportunity in a new light – I even gave a copy of the article to the banker. It was extremely timely and helpful – I ought to give you some of the commiss… END_OF_DOCUMENT_TOKEN_TO_BE_REPLACED

I really enjoyed reading the post on the value of people in a business and the difficulty associated with managing different personalities and skills. I particularly enjoyed the discussion on empathy as one of the most special and important gifts of our brain. I believe that empathy is an aspect of the human condition that affects so many aspects of social relationships, and can completely dictate the way we feel about someone, how we receive and react to them, and in the context of a busines… END_OF_DOCUMENT_TOKEN_TO_BE_REPLACED

“I’ve enjoyed the erudition of your written work, especially your piece on “Laughter In The Workplace”; wherein you gingerly skip from Plato, Aristotle, Hobbes, and Descartes over to Kant and Schopenhauer, (by way of Freud and Spencer) with Abe Lincoln added for good measure. Each individual in your pantheon, especially lately, Kant, has provided important guideposts along the way for my own growth. I particularly appreciated your Laughter piece because it helped me to smile and be more light-he… END_OF_DOCUMENT_TOKEN_TO_BE_REPLACED

The blog post “The Most Difficult Aspect of Business is People” is a very good read and I think most if not all business owners should read it. I completely agree with the author’s thoughts about empathy. I think that most individuals tend to categorize sensitivity and the ability to understand and share feelings with weakness, therefore this always leads to there being “that guy” in most businesses. I believe that businesses that show more empathy have greater chances of success as it improves… END_OF_DOCUMENT_TOKEN_TO_BE_REPLACED