The Best Ways to Spot a Liar 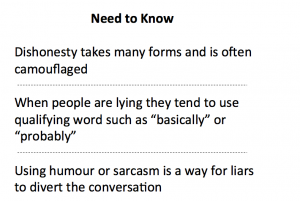 In the previous article –  “How do You Know Who  You Can Trust?” – I focused on some caveats related to detecting lies and misinformation and reviewed some details on nonverbal signals.

Now – I would like to take a look at verbal signals as well as a couple examples of how lies of various shapes and sizes manifest themselves. 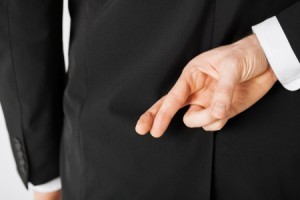 As a supplement to the previous articles and the above summary – I have pulled together a short list of verbal cues.

As usual, I am starting with a vast amount of information (including some conflicting) with an objective of sharing something I can stand behind. So – based on past practice I will focus on things I have seen work.

In no particular order, because regardless of size or shape, lies are lies:

Is it Dishonesty or Strategy?

“A lie that is half-truth is the darkest of all lies. – Lord Alfred Tennyson

I am presenting the following mindful they sit at a fine line between dishonesty and ‘strategy’ but I include them since I think they illustrate how fair and efficient business is dependent on honesty at all points. In this case the situations range from about $1M to over fifty times that amount.

At the exaggerated risk of splitting hairs – we love optimism but we don’t appreciate falsified lab results, client expressions of interest, etc. Sadly, startups (management and investors) initially distort the truth out of enthusiasm and subsequently out of desperation.

Ironically, if they are successful in misleading others (presumably to raise more investments) the most likely outcome is poor capital efficiency which comes back to bite them as they are diluted. Is it possible honesty really is the best policy?

“Lying is the greatest of all sins.” ~ Alfred Nobel

The next two examples involve the same misleading approach. Basically, the concept is that one enters into an agreement/makes an offer knowing full well that just before the transaction closes you will balk and have significant leverage with the other party since they have so much ‘sunk’ time and costs.

How does this manifest itself? Here are a few situations:

The moral of these stories is that dishonesty takes many forms and is often camouflaged. For reasons I’ve described in this article you can never let your guard down. I hope some of what I have shared with you helps you in this regard.

You Can Never Know Too Much

One conclusion I would like to propose here is based on the scope for dishonesty, the context for rewards and the difficulty in detecting lies as we have illustrated in these two articles.

I would suggest this highlights the importance of another topic from past articles – due diligence.  You can never know too much about the people you are doing business with. I think it is an important skill to be able to determine if more due diligence, reference checks, etc. are called for. But – the real focus should reflect the following:

We have seen ample evidence that past behavior is arguably the best prediction of future behavior.

“Always tell the truth. Even if you have to make it up.” – Author Unknown

In case you want to dig deeper:

For my closing comment on the situation, I turn to an author, American economist and political philosopher:

“There are only two ways of telling the complete truth – anonymously and posthumously.” – Thomas Sowell

The Business Brain Model  occupies a special niche, bringing together decades of experience across a very wide range of business and finance with an extraordinarily in-depth knowledge of the interface of neuroscience and psychology, including the latest developments in those fast-changing domains. This provides a singular insight into how these disciplines interact, and how recent developments in brain science can have a dramatic effect on business success. Bud’s writings should be required re… END_OF_DOCUMENT_TOKEN_TO_BE_REPLACED

In the “Business vs. Science: Are you losing this fight” blog, Bud’s main question is “if the information is available but is not being used, I put the question to you – why” and I believe this strongly relates as to why people are the most difficult aspect of business. I think being open to change is a huge obstacle that needs to be overcome by individuals in businesses today. I agree that change is scary and often requires a lot of preparation before it can be implemented, but the result could… END_OF_DOCUMENT_TOKEN_TO_BE_REPLACED

The blog post “The Most Difficult Aspect of Business is People” is a very good read and I think most if not all business owners should read it. I completely agree with the author’s thoughts about empathy. I think that most individuals tend to categorize sensitivity and the ability to understand and share feelings with weakness, therefore this always leads to there being “that guy” in most businesses. I believe that businesses that show more empathy have greater chances of success as it improves… END_OF_DOCUMENT_TOKEN_TO_BE_REPLACED

Rarely does a truly inspirational business leader come along who has achieved phenomenal success by challenging traditional thinking and is committed to sharing what he has learned with others – to improve business and the world. All too often organizations operate in cultures where tradition is revered and powerful systems prevent innovation from occurring. Yet both business and education are at a tipping point; mainstream practices are simply not sustainable – it must change.  Successful leade… END_OF_DOCUMENT_TOKEN_TO_BE_REPLACED

“I’ve enjoyed the erudition of your written work, especially your piece on “Laughter In The Workplace”; wherein you gingerly skip from Plato, Aristotle, Hobbes, and Descartes over to Kant and Schopenhauer, (by way of Freud and Spencer) with Abe Lincoln added for good measure. Each individual in your pantheon, especially lately, Kant, has provided important guideposts along the way for my own growth. I particularly appreciated your Laughter piece because it helped me to smile and be more light-he… END_OF_DOCUMENT_TOKEN_TO_BE_REPLACED

I really enjoyed reading the post on the value of people in a business and the difficulty associated with managing different personalities and skills. I particularly enjoyed the discussion on empathy as one of the most special and important gifts of our brain. I believe that empathy is an aspect of the human condition that affects so many aspects of social relationships, and can completely dictate the way we feel about someone, how we receive and react to them, and in the context of a busines… END_OF_DOCUMENT_TOKEN_TO_BE_REPLACED

“Thank you! This article (How To Exercise Your Decision Making Muscle) helped me close a deal over weekend! We had been working with an investment bank to get investment done in a client’s company for a long, long time. I used many tactics from the article including ‘go / no go date, analysis paralysis explanation and using imagination to see opportunity in a new light – I even gave a copy of the article to the banker. It was extremely timely and helpful – I ought to give you some of the commiss… END_OF_DOCUMENT_TOKEN_TO_BE_REPLACED