How Do You Know Who You Can Trust? 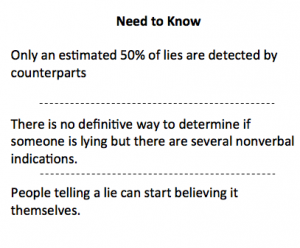 “He that has eyes to see and ears to hear may convince himself that no mortal can keep a secret. If his lips are silent, he chatters with his finger-tips; betrayal oozes out of him at every pore.” ~ Sigmund Freud, “Dora: An Analysis of a Case of Hysteria (Collected Papers of Sigmund Freud)”

If only it were that easy.

There are volumes (I have read several) written on the neuroscience and behavioral aspects of dishonesty and its detection. I have decided to write on this topic given its importance to the integrity of relationships and transactions. In other words – it’s all part and parcel of the Business Brain Model.

Sadly, the business world (maybe because of the financial stakes and/or – just as likely – because of egos) is replete with people who are predisposed to misrepresent information ranging from simple (Is there such a thing?) lies to more elaborate deceptions including outright fraud. Simply put, in my opinion, honesty should not necessarily be calibrated by how high the stakes are. 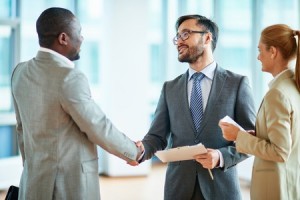 I am, for the purposes here, disregarding what are often called – “polite lies.”  By definition these are benign in nature – e.g. designed to not hurt someone’s feelings.

I intend to approach this topic from four perspectives.

The first two I will deal with in this article, the next two can be found in “The Best Ways to Spot a Liar.”

I have in previous posts shared the original rule of thumb to determine if someone is lying in the world of business: as you may remember their lips are moving.

Other than this generalization I am not for a minute suggesting there is any definitive way to determine that someone is not telling the truth although certain professionals (individuals who devote their life to lie detection vs. a business person) do purportedly become more proficient.

“There are three types of lies – lies, damn lies, and statistics.” – Benjamin Disraeli*

This article is just another example that involves humans and their behavior which is at best an imperfect science so you need to take the ‘helpful hints’ that follow with a grain of salt.

Before I get into a couple specific (personal) examples that illustrate fallibility of determining honesty I should point out there are (what should be) obvious complicating factors such as:

It should be noted that it is estimated only about 50 percent of lies are detected by counterparts.

I can share a few anecdotes from my career that further illustrate that this may be closer to art than science. And I believe you can even look at this from an evolutionary point of view – if lying were not successful it would have disappeared!

Having said this – in the Epilogue in his book “Telling Lies: Clues to Deceit in the Marketplace, Politics, and Marriage,”Paul Ekman writes, “I think it is easier to improve one’s ability to detect deceit than to perpetrate it.” Hard to believe!

I ask you now – what is your experience? When have you caught others in a lie? When did you think you caught someone in a lie but it wasn’t a lie? The more examples you share the more we can all learn (and in some cases laugh).

I have written a four part series on nonverbal communication and while it was not designed to focus on detecting lies there are several relevant references:

In my next article, “The Best Ways to Spot a Liar,” I address the many various sizes (and shapes) of lies you need to look out for.

“One of the most striking differences between a cat and a lie is that a cat has only nine lives.” – Mark Twain

*Speaking of, Twain is the one who originally credited the “lies, damned lies, and statistics” quote to Disraeli but that quote is not found in any of the Prime Minister’s published works

The Business Brain Model  occupies a special niche, bringing together decades of experience across a very wide range of business and finance with an extraordinarily in-depth knowledge of the interface of neuroscience and psychology, including the latest developments in those fast-changing domains. This provides a singular insight into how these disciplines interact, and how recent developments in brain science can have a dramatic effect on business success. Bud’s writings should be required re… END_OF_DOCUMENT_TOKEN_TO_BE_REPLACED

Rarely does a truly inspirational business leader come along who has achieved phenomenal success by challenging traditional thinking and is committed to sharing what he has learned with others – to improve business and the world. All too often organizations operate in cultures where tradition is revered and powerful systems prevent innovation from occurring. Yet both business and education are at a tipping point; mainstream practices are simply not sustainable – it must change.  Successful leade… END_OF_DOCUMENT_TOKEN_TO_BE_REPLACED

In the “Business vs. Science: Are you losing this fight” blog, Bud’s main question is “if the information is available but is not being used, I put the question to you – why” and I believe this strongly relates as to why people are the most difficult aspect of business. I think being open to change is a huge obstacle that needs to be overcome by individuals in businesses today. I agree that change is scary and often requires a lot of preparation before it can be implemented, but the result could… END_OF_DOCUMENT_TOKEN_TO_BE_REPLACED

“Thank you! This article (How To Exercise Your Decision Making Muscle) helped me close a deal over weekend! We had been working with an investment bank to get investment done in a client’s company for a long, long time. I used many tactics from the article including ‘go / no go date, analysis paralysis explanation and using imagination to see opportunity in a new light – I even gave a copy of the article to the banker. It was extremely timely and helpful – I ought to give you some of the commiss… END_OF_DOCUMENT_TOKEN_TO_BE_REPLACED

I really enjoyed reading the post on the value of people in a business and the difficulty associated with managing different personalities and skills. I particularly enjoyed the discussion on empathy as one of the most special and important gifts of our brain. I believe that empathy is an aspect of the human condition that affects so many aspects of social relationships, and can completely dictate the way we feel about someone, how we receive and react to them, and in the context of a busines… END_OF_DOCUMENT_TOKEN_TO_BE_REPLACED

“I’ve enjoyed the erudition of your written work, especially your piece on “Laughter In The Workplace”; wherein you gingerly skip from Plato, Aristotle, Hobbes, and Descartes over to Kant and Schopenhauer, (by way of Freud and Spencer) with Abe Lincoln added for good measure. Each individual in your pantheon, especially lately, Kant, has provided important guideposts along the way for my own growth. I particularly appreciated your Laughter piece because it helped me to smile and be more light-he… END_OF_DOCUMENT_TOKEN_TO_BE_REPLACED

The blog post “The Most Difficult Aspect of Business is People” is a very good read and I think most if not all business owners should read it. I completely agree with the author’s thoughts about empathy. I think that most individuals tend to categorize sensitivity and the ability to understand and share feelings with weakness, therefore this always leads to there being “that guy” in most businesses. I believe that businesses that show more empathy have greater chances of success as it improves… END_OF_DOCUMENT_TOKEN_TO_BE_REPLACED