Why your gray and white matter matters 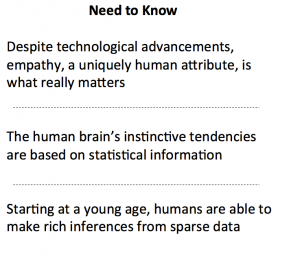 “To err is human, but to really foul things up you need a computer.” – Paul R. Ehrlich

In our previous post titled “Are we as dumb as we think we are?” we looked at the work of MIT scientist Laura Schulz and others involving young children (around two years old).  Their findings centered on two ideas:

In other words, babies sense when a smaller set represents a larger population.

(Btw, in Schulz’ TED Talk titled “The surprisingly logical minds of babies” she has amazing video snippets of her research with toddlers)

To say this is the most fascinating research I have seen in a long time would be a complete understatement.

“A story about minds, not brains” 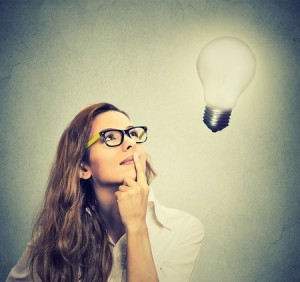 In short, Schulz’s work illustrates the uniquely human ability to make “rich inference from sparse data.” Her observations include:

“The human brain works as a binary computer and can only analyze the exact information-based zeros and ones (or black and white).  Our heart is more like a chemical computer that uses fuzzy logic to analyze information that can’t be easily defined in zeros and ones.” – Naveen Jain

As she waxes eloquently on the fascinating results she also reminds us that the human brain is uniquely suited to initiatives such as: sensing what others are thinking, dealing with confounded evidence, causal relationships, making tools and vocabulary.

“A computer would deserve to be called intelligent if it could deceive a human into believing that it was human.” – Alan Turing

Out of fairness, Schulz does touch on the area where computers have the advantage – in particular, dealing with ‘big data’ and of course, the looming machine learning.

Nevertheless her work does encourage me to revisit one of our earliest posts titled “Is Hyper-Connectivity Making us More Disconnected?” In that piece I delve into the battle of silicon (digital) vs. carbon (people). And like all good battles (think Ali-Frazier or the early Rocky movies), there is a Round Two.

With that in mind, it looks like a classic slugfest between silicon and carbon until Schulz reminds us at the end of her TED Talk about the amazing capacities of the human brain in areas such as creative ideas, research, discovery, art, literature and music.

“Never trust a computer you can’t throw out a window.” – Steve Wozniak

So now, silicon is on the ropes when she comments, “In the years to come we are going to see technological innovations beyond anything I can even envision. But we are very unlikely to see anything even approximating the computational power of a human child in my lifetime or in yours.”

However, the knockout punch comes when she reminds us about the ultimate uniquely human attribute: Schulz touches on what really matters (and a topic included in several of my writings) empathy.

Again, (especially given her credentials) I will give final word to her.

“Human minds take care of other humans. Our old, our young, our sick. We even heal them.”

So what do you think? Have I convinced you carbon is better than silicon? Do you believe the brain is a supercomputer that starts programming before we can talk? I’d love to hear what’s going on in your brain.

In the “Business vs. Science: Are you losing this fight” blog, Bud’s main question is “if the information is available but is not being used, I put the question to you – why” and I believe this strongly relates as to why people are the most difficult aspect of business. I think being open to change is a huge obstacle that needs to be overcome by individuals in businesses today. I agree that change is scary and often requires a lot of preparation before it can be implemented, but the result could… END_OF_DOCUMENT_TOKEN_TO_BE_REPLACED

Rarely does a truly inspirational business leader come along who has achieved phenomenal success by challenging traditional thinking and is committed to sharing what he has learned with others – to improve business and the world. All too often organizations operate in cultures where tradition is revered and powerful systems prevent innovation from occurring. Yet both business and education are at a tipping point; mainstream practices are simply not sustainable – it must change.  Successful leade… END_OF_DOCUMENT_TOKEN_TO_BE_REPLACED

“Thank you! This article (How To Exercise Your Decision Making Muscle) helped me close a deal over weekend! We had been working with an investment bank to get investment done in a client’s company for a long, long time. I used many tactics from the article including ‘go / no go date, analysis paralysis explanation and using imagination to see opportunity in a new light – I even gave a copy of the article to the banker. It was extremely timely and helpful – I ought to give you some of the commiss… END_OF_DOCUMENT_TOKEN_TO_BE_REPLACED

The Business Brain Model  occupies a special niche, bringing together decades of experience across a very wide range of business and finance with an extraordinarily in-depth knowledge of the interface of neuroscience and psychology, including the latest developments in those fast-changing domains. This provides a singular insight into how these disciplines interact, and how recent developments in brain science can have a dramatic effect on business success. Bud’s writings should be required re… END_OF_DOCUMENT_TOKEN_TO_BE_REPLACED

“I’ve enjoyed the erudition of your written work, especially your piece on “Laughter In The Workplace”; wherein you gingerly skip from Plato, Aristotle, Hobbes, and Descartes over to Kant and Schopenhauer, (by way of Freud and Spencer) with Abe Lincoln added for good measure. Each individual in your pantheon, especially lately, Kant, has provided important guideposts along the way for my own growth. I particularly appreciated your Laughter piece because it helped me to smile and be more light-he… END_OF_DOCUMENT_TOKEN_TO_BE_REPLACED

The blog post “The Most Difficult Aspect of Business is People” is a very good read and I think most if not all business owners should read it. I completely agree with the author’s thoughts about empathy. I think that most individuals tend to categorize sensitivity and the ability to understand and share feelings with weakness, therefore this always leads to there being “that guy” in most businesses. I believe that businesses that show more empathy have greater chances of success as it improves… END_OF_DOCUMENT_TOKEN_TO_BE_REPLACED

I really enjoyed reading the post on the value of people in a business and the difficulty associated with managing different personalities and skills. I particularly enjoyed the discussion on empathy as one of the most special and important gifts of our brain. I believe that empathy is an aspect of the human condition that affects so many aspects of social relationships, and can completely dictate the way we feel about someone, how we receive and react to them, and in the context of a busines… END_OF_DOCUMENT_TOKEN_TO_BE_REPLACED