Are we as dumb as we think we are? 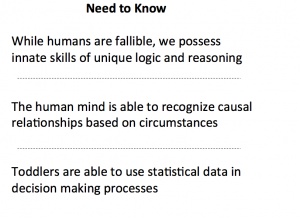 “There is something fascinating about science. One gets such wholesale returns of conjecture out of such a trifling investment in fact.” – Mark Twain (1883)

I have chosen to repeat a quote cited by the ‘star’ of this for reasons I trust will become apparent.

Let me start by declaring I have a new heroine – Laura Schulz. To me, this associate professor in the Department of Brain and Cognitive Sciences at MIT, is the Lara Croft of brain research – a published author and big game hunter (in this case the brain, with 100 billion neurons, is the big game) who does not disappoint.

She (and her colleagues) has reached this lofty accomplishment for (at least) two reasons related to their work with cognition.

I will deal with why we get it wrong more than we get it right here and why computers will never match the brain in the next post.

In very general terms: Schulz and her colleagues use an experimental design where they had a subset of toys that in some cases worked or not depending on circumstances – including defective toy or ‘defective’ individual manipulating the toy.

What was mind blowing was that toddlers were able to show significant cognitive skills as described:

For the pure business crowd – that means they showed cognitive prowess in two areas:

In summary – they showed that children, in only their second year of living, use statistical data in the decision-making process.

“A child in the second year of life can use statistical data to decide how to deal with the world.” ~ Laura Schulz

It is startling (no inspirational!), no matter how you describe it, to see that these children had learned so much from so little – so quickly.

With all that in mind you should hit her Ted Talk: “The Surprisingly Logical Minds of Babies”.

Yin-Yang and the balance of nature and mind

In sharp contrast to earlier posts on cognitive biases, thinking errors and other shortcomings that I have flagged – this one is more a celebration of how special the human mind is:

In closing, I can only think of a yin-yang scenario. Clearly, on one hand we are fallible and make mistakes we should see coming. On the other hand, we possess innate skills of logic that are absolutely unique.

“It is my hope the concept of the Business Brain Model will encourage business people to think more on how to play to their strengths and augment their weaknesses.”

Could this be an example of the Chinese philosophy reflecting harmonization and dynamic balance? Let me know your thoughts in the Comments section.

It is my hope the concept of the Business Brain Model will encourage business people to think more on how to play to their strengths and augment their weaknesses.

Given the importance of Schulz work I encourage you to spend a bit of time delving into the hard science.

“Is it me or the world? 16-month-olds distinguish competing hypotheses about the cause of failed interventions,” Gweon, Schulz,

The Business Brain Model  occupies a special niche, bringing together decades of experience across a very wide range of business and finance with an extraordinarily in-depth knowledge of the interface of neuroscience and psychology, including the latest developments in those fast-changing domains. This provides a singular insight into how these disciplines interact, and how recent developments in brain science can have a dramatic effect on business success. Bud’s writings should be required re… END_OF_DOCUMENT_TOKEN_TO_BE_REPLACED

Rarely does a truly inspirational business leader come along who has achieved phenomenal success by challenging traditional thinking and is committed to sharing what he has learned with others – to improve business and the world. All too often organizations operate in cultures where tradition is revered and powerful systems prevent innovation from occurring. Yet both business and education are at a tipping point; mainstream practices are simply not sustainable – it must change.  Successful leade… END_OF_DOCUMENT_TOKEN_TO_BE_REPLACED

In the “Business vs. Science: Are you losing this fight” blog, Bud’s main question is “if the information is available but is not being used, I put the question to you – why” and I believe this strongly relates as to why people are the most difficult aspect of business. I think being open to change is a huge obstacle that needs to be overcome by individuals in businesses today. I agree that change is scary and often requires a lot of preparation before it can be implemented, but the result could… END_OF_DOCUMENT_TOKEN_TO_BE_REPLACED

“Thank you! This article (How To Exercise Your Decision Making Muscle) helped me close a deal over weekend! We had been working with an investment bank to get investment done in a client’s company for a long, long time. I used many tactics from the article including ‘go / no go date, analysis paralysis explanation and using imagination to see opportunity in a new light – I even gave a copy of the article to the banker. It was extremely timely and helpful – I ought to give you some of the commiss… END_OF_DOCUMENT_TOKEN_TO_BE_REPLACED

I really enjoyed reading the post on the value of people in a business and the difficulty associated with managing different personalities and skills. I particularly enjoyed the discussion on empathy as one of the most special and important gifts of our brain. I believe that empathy is an aspect of the human condition that affects so many aspects of social relationships, and can completely dictate the way we feel about someone, how we receive and react to them, and in the context of a busines… END_OF_DOCUMENT_TOKEN_TO_BE_REPLACED

“I’ve enjoyed the erudition of your written work, especially your piece on “Laughter In The Workplace”; wherein you gingerly skip from Plato, Aristotle, Hobbes, and Descartes over to Kant and Schopenhauer, (by way of Freud and Spencer) with Abe Lincoln added for good measure. Each individual in your pantheon, especially lately, Kant, has provided important guideposts along the way for my own growth. I particularly appreciated your Laughter piece because it helped me to smile and be more light-he… END_OF_DOCUMENT_TOKEN_TO_BE_REPLACED

The blog post “The Most Difficult Aspect of Business is People” is a very good read and I think most if not all business owners should read it. I completely agree with the author’s thoughts about empathy. I think that most individuals tend to categorize sensitivity and the ability to understand and share feelings with weakness, therefore this always leads to there being “that guy” in most businesses. I believe that businesses that show more empathy have greater chances of success as it improves… END_OF_DOCUMENT_TOKEN_TO_BE_REPLACED