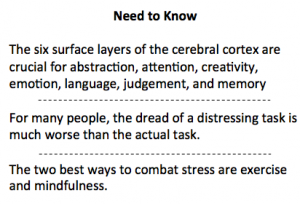 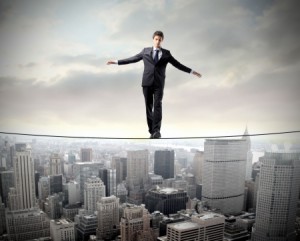 “When you take risks, you are reminded in the most insistent manner that you have a body.” ~ John Coates

Some would call this next statement a risk – but I wouldn’t: If the following doesn’t capture your attention around the issues of the body/brain connection and its relevance in the real-business-world – nothing will.  Nothing.

Our opening quote is the opening sentence in John’s book “The Hour Between Dog and Wolf: Risk Taking, Gut Feelings and the Biology of Boom and Bust.” That quote says it all.  Think I’m kidding? While the work of John overlaps with the next two posts it is so striking (profound) that I have given it ‘top billing.’

I have had the pleasure of doing so in person several times and if you ever have the chance, I highly recommend you see John speak or attend a lecture. Imagine having your work described as follows:

While we have touched on (in a couple places) our fight or flight response – largely originating from the amygdala, the poignant issue with John is that the body goes into this same state (often counterproductively) when you are NOT in a life or death struggle. His book illustrates the biological and emotional reaction to the world of business – specifically financial risk. Sadly, economists tend to view the analysis of financial risk as a strictly cerebral business.

In case, you think this is an individual issue – John argues eloquently that this could be a big source of market instability. In a New York Times Sunday Review Opinion piece titled “The Biology of Risk,” he indicates Wall Street’s biggest problem is passive traders who should be capitalizing on crashing markets but aren’t. “Unfortunately, this risk aversion occurs at just the wrong time, for these crises are precisely when markets offer the most attractive opportunities, and when the economy most needs people to take risks.”

However, given this is are written for you – an individual – let’s imagine the repercussions to your business. What if you had diminished ability to relate to (better yet exploit) risk? When you engage in risk taking you transform into a different person – a kindred spirit with athletes, politicians and soldiers – anyone that ventures beyond their safety zone.

Incidentally, while John’s work was in the living laboratory that is Wall Street and London – academics from across the world, in a wide range of studies, have also shown similar phenomena in the lab. A few examples: a collaboration of scientists from the U.S. and Spain looked at why CEOs make risky choices; researchers at the University of Southern California studied whether men or women took more or less risks when under stress; and another multi-university examination looked at whether or not a board’s diversity is good or bad for risky decisions. As with most academic works – a large part of the value here, in my opinion, is the numerous sources it lists. There is hard science at play here.

Much of the preceding and the following are based on John’s writings and some ideas we exchanged based on his business and academic career.

The Challenge of Long-Term Streaks

Cortisol, the steroid hormone, pumps glucose and free fatty acids into our blood to meet whatever physiological demands (fight or flight?) we may face. It also pushes back any bodily functions – say digestive, reproductive or immune systems (note the latter – it will be relevant in subsequent posts) – that are not necessary for survival. So, what John calls our “challenge response” is another way the body and brain unite to function as one.

Remember, this is “fight or flight” we are talking about so we are talking a quick decision and quick impact – we are not designed to handle biochemical disturbances on a long-term basis. Basically, we are built to “turn on” for a couple minutes or couple hours (couple days at most) and then “turn off.” Our caveman body (and mind) is purposed for fighting – or running from – a tiger rather than the Wolf of Wall Street. The nature we are intended for is actual nature, not the nature of business.

I believe everyone – from the trader on Wall Street to the business manager on Main Street or from the professional athlete to the weekend warrior – understands slumps or losing streaks. It is these times that mess with our mind (and body) the most. We question our decisions repeatedly so the biochemical disturbance (in this case stress hormones) lingers in our head and in turn advances a chronic risk aversion. And as far as the body goes, once the stress hormones get into your blood system they can lead to an onslaught of viral infections, elevated blood pressure, ulcers, weight gain and more.

For many people, the dread of a distressing task is much worse than the actual task. That’s where John’s “challenge response” comes into play. As our defense mechanism, it prepares us for the unknown challenge. But if that challenge has the potential to linger for an unknown amount of time then our mind (and body) are in trouble.

Again in John’s words: “Remarkable call and echo between news and body.”

Just to reinforce the point: Robert M. Sapolsky, who wrote “Why Zebras Don’t Get Ulcers,” is another one who believes the body and mind is firmly connected. In a recent New York Times Sunday Review Opinion piece titled “No Time to Be Nice at Work,” Christine Porath points out his argument that  “when people experience intermittent stressors, their immune systems pay the price. Often they experience major health problems, including cardiovascular disease, cancer, diabetes and ulcers.”

And finally (my wife would never forgive me if I did not give credit where credit is due) John’s research also reveals that when men and women are exposed to chronically-raised levels of cortisol, it is the men who place “too much importance on smaller risks” – not the women.

What’s a businessperson to do?

No self-respecting businessperson (universal profile of our readers I’m sure!) does not feel compelled to ask – “How do I increase my tolerance (with no side effects) for stress?” as opposed to “How do I avoid stress?.”

As the saying goes – if I knew this I would be rich. But I can at least share some relevant information with you (by the way – let me know what works!).  The following are, clearly, broad stroke but at least I don’t avoid the issue. I might add that in keeping with my objective to only promote things I have seen work that I am comfortable putting these two on your radar screen.  Keeping in mind much of our resilience comes in our genetics and is further modified as we develop (nature and nurture), I assume the ability to adjust is not limitless – at some point part of the strategy must be avoiding stress.

“True enjoyment comes from activity of the mind and exercise of the body; the two are ever united.” ~ Wilhelm von Humboldt

We have previously highlighted the value of exercise to a healthy and productive body/mind in various other posts (e.g. plasticity) but here are some salient points from John Coates. In some cases, drawing from the programs of top-class athletes, since they are the people with the most experience of controlling their hormones and emotions in the interest of optimizing performance.

“Your vision will become clear only when you look into your heart. Who looks outside, dreams. Who looks inside, awakens.” ~ Carl Jung

The second approach that I am convinced is effective centers around ‘mindfulness.’ While mindfulness has been incorporated into meditation and yoga, I’ll stick to it in its simplest form.

Mindfulness is defined by the Oxford Dictionaries as “A mental state achieved by focusing one’s awareness on the present moment, while calmly acknowledging and accepting one’s feelings, thoughts and bodily sensations, used as a therapeutic technique.”

There is ample scientific evidence of an increase in benefits such as:

The benefits go on but you get the point.

Never mind what I might say about the business benefits – apparently Goldman Sachs and Blackrock are providing yoga classes for their people. Anyone who knows Wall Street knows that I don’t need to say anymore. (Drops the mic and walks away.)

I really enjoyed reading the post on the value of people in a business and the difficulty associated with managing different personalities and skills. I particularly enjoyed the discussion on empathy as one of the most special and important gifts of our brain. I believe that empathy is an aspect of the human condition that affects so many aspects of social relationships, and can completely dictate the way we feel about someone, how we receive and react to them, and in the context of a busines…

Rarely does a truly inspirational business leader come along who has achieved phenomenal success by challenging traditional thinking and is committed to sharing what he has learned with others – to improve business and the world. All too often organizations operate in cultures where tradition is revered and powerful systems prevent innovation from occurring. Yet both business and education are at a tipping point; mainstream practices are simply not sustainable – it must change.  Successful leade…

In the “Business vs. Science: Are you losing this fight” blog, Bud’s main question is “if the information is available but is not being used, I put the question to you – why” and I believe this strongly relates as to why people are the most difficult aspect of business. I think being open to change is a huge obstacle that needs to be overcome by individuals in businesses today. I agree that change is scary and often requires a lot of preparation before it can be implemented, but the result could…

The blog post “The Most Difficult Aspect of Business is People” is a very good read and I think most if not all business owners should read it. I completely agree with the author’s thoughts about empathy. I think that most individuals tend to categorize sensitivity and the ability to understand and share feelings with weakness, therefore this always leads to there being “that guy” in most businesses. I believe that businesses that show more empathy have greater chances of success as it improves…

The Business Brain Model  occupies a special niche, bringing together decades of experience across a very wide range of business and finance with an extraordinarily in-depth knowledge of the interface of neuroscience and psychology, including the latest developments in those fast-changing domains. This provides a singular insight into how these disciplines interact, and how recent developments in brain science can have a dramatic effect on business success. Bud’s writings should be required re…