From the Sublime to the Ridiculous

“Nothing is so strong as gentleness, nothing so gentle as real strength.” – Saint Francis de Sales

Question: What does a fierce warrior culture find in common with a humorist/journalist?

Answer: A focus on the salient issues of being human.

My reference to ‘ridiculous’ in the title is not intended so much in the literal sense of ludicrous as much as the use of simple language with a humorous undertone. My use of the description ridiculous is in the context of something humorous including (at least in my mind) a light description of a heavy topic.

In fact, from a ‘neuroscientific’ point of view, it is these characteristics that make Mark Twain quotes so memorable.

As always, I am intrigued when two different approaches can lead to the same endpoint. I am also intrigued when paradoxes manifest themselves via clear illustrations.

Looking back to our ‘roadmap’ and its overview of upcoming blogs, this falls into the category of: “A situation, person or thing that combines contradictory features or qualities.”

According to The History of the Bushido Code: Principles of Samurai Culture (#2): “Bushido is a code of conduct that emerged in Japan from the Samurai, or Japanese warriors, who spread their ideals throughout society. Inspiration was drawn from Confucianism, which is a relatively conservative philosophy and system of beliefs that places a great deal of importance on loyalty and duty. The Bushido code contains eight key principles or virtues that warriors were expected to uphold.”

“The word “bushi,” a synonym for warrior, serves as a root for the word “Bushido.” The word Samurai roughly translates to “those who serve,” but has come to mean warrior. To understand the foundation of the Bushido code, one must examine the history of the Samurai.”

“The history of the Samurai began in the eighth century when armed supporters of wealthy landowners began to be known as Samurai. Toward the end of the 12th century, power in Japan shifted and the Kamakura Shogunate military dictatorship was established. During this time, leaders popularized the use of Samurai and codified their privileged status.”

Clearly, a culture of rigor and organization – as illustrated by the following succinct presentation of their key principles – accompanied by contradictory features.

Thanks to Wikipedia and Bibliography.com, we can summarize the life of Mark Twain as follows:

“Samuel Langhorne Clemens is known by his pen name Mark Twain. He was an American writer, humorist, and entrepreneur who lived from the mid-1800’s to the early 1900’s. Much of his legacy is based on his travel narratives and two major classics of American literature: The Adventures of Tom Sawyer and Adventures of Huckleberry Finn. He was also a riverboat pilot, journalist, lecturer, entrepreneur and inventor.”

However, in my mind and for the purposes of this article, I would say he was particularly talented at putting profound thoughts into a lexicon that resonated. Incidentally, I believe this is the description he would have preferred.

The following Bushido text is replicated from The History of the Bushido Code: Principles of Samurai Culture: 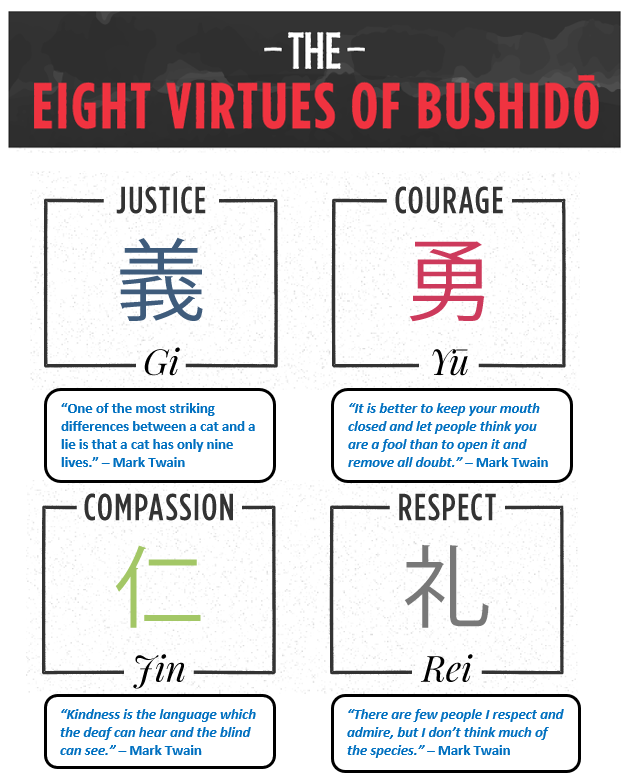 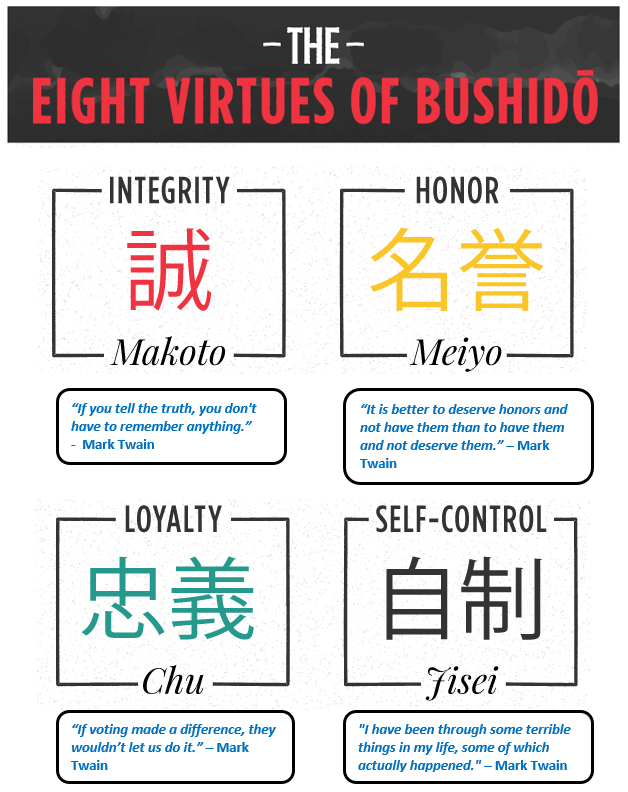 According to Dictionary.com as it cites in The Age of Reason (1794), Tom Paine is said to have commented “the two (sublime and ridiculous) are so closely related that it is but one step from one to the other, the phrase has been often repeated in either order.” (#1) 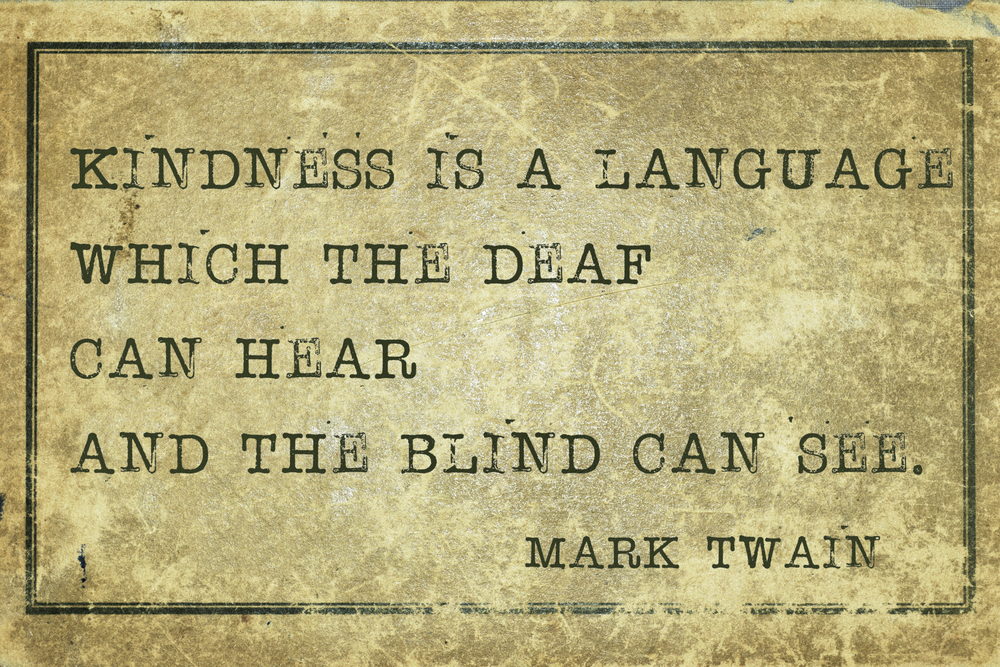 This is, of course, another variation on the (paradox) theme we started with – as we appreciate “light” words carrying a lot of weight. consistent with the theme of the Business Brain Model, I trust the preceding is a good example of effective communication.

Finally, I choose to give the final words that are arguably amongst his most profound to Twain. As we find ourselves living in a world that demands introspection to understand where we should be/what we should do.

“The two most important days in your life are the day you are born and the day you find out why.”

In the “Business vs. Science: Are you losing this fight” blog, Bud’s main question is “if the information is available but is not being used, I put the question to you – why” and I believe this strongly relates as to why people are the most difficult aspect of business. I think being open to change is a huge obstacle that needs to be overcome by individuals in businesses today. I agree that change is scary and often requires a lot of preparation before it can be implemented, but the result could… END_OF_DOCUMENT_TOKEN_TO_BE_REPLACED

Rarely does a truly inspirational business leader come along who has achieved phenomenal success by challenging traditional thinking and is committed to sharing what he has learned with others – to improve business and the world. All too often organizations operate in cultures where tradition is revered and powerful systems prevent innovation from occurring. Yet both business and education are at a tipping point; mainstream practices are simply not sustainable – it must change.  Successful leade… END_OF_DOCUMENT_TOKEN_TO_BE_REPLACED

“Thank you! This article (How To Exercise Your Decision Making Muscle) helped me close a deal over weekend! We had been working with an investment bank to get investment done in a client’s company for a long, long time. I used many tactics from the article including ‘go / no go date, analysis paralysis explanation and using imagination to see opportunity in a new light – I even gave a copy of the article to the banker. It was extremely timely and helpful – I ought to give you some of the commiss… END_OF_DOCUMENT_TOKEN_TO_BE_REPLACED

The Business Brain Model  occupies a special niche, bringing together decades of experience across a very wide range of business and finance with an extraordinarily in-depth knowledge of the interface of neuroscience and psychology, including the latest developments in those fast-changing domains. This provides a singular insight into how these disciplines interact, and how recent developments in brain science can have a dramatic effect on business success. Bud’s writings should be required re… END_OF_DOCUMENT_TOKEN_TO_BE_REPLACED

“I’ve enjoyed the erudition of your written work, especially your piece on “Laughter In The Workplace”; wherein you gingerly skip from Plato, Aristotle, Hobbes, and Descartes over to Kant and Schopenhauer, (by way of Freud and Spencer) with Abe Lincoln added for good measure. Each individual in your pantheon, especially lately, Kant, has provided important guideposts along the way for my own growth. I particularly appreciated your Laughter piece because it helped me to smile and be more light-he… END_OF_DOCUMENT_TOKEN_TO_BE_REPLACED

The blog post “The Most Difficult Aspect of Business is People” is a very good read and I think most if not all business owners should read it. I completely agree with the author’s thoughts about empathy. I think that most individuals tend to categorize sensitivity and the ability to understand and share feelings with weakness, therefore this always leads to there being “that guy” in most businesses. I believe that businesses that show more empathy have greater chances of success as it improves… END_OF_DOCUMENT_TOKEN_TO_BE_REPLACED

I really enjoyed reading the post on the value of people in a business and the difficulty associated with managing different personalities and skills. I particularly enjoyed the discussion on empathy as one of the most special and important gifts of our brain. I believe that empathy is an aspect of the human condition that affects so many aspects of social relationships, and can completely dictate the way we feel about someone, how we receive and react to them, and in the context of a busines… END_OF_DOCUMENT_TOKEN_TO_BE_REPLACED