What Does Ecological Validity Have to Do with Business? 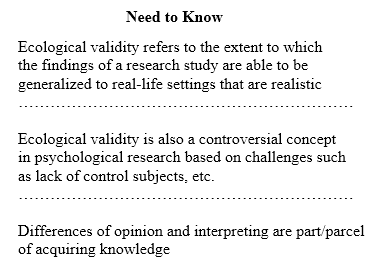 “In the business world the rearview mirror is always clearer than the windshield.” – Warren Buffet

“For the unexamined life is not worth living.” – Plato, The Trial and Death of Socrates

Several of the topics contained in the Business Brain Model writings touch on topics that fall squarely in the realm of “popular psychology”. The implication of this (per Wikipedia) is that “the concepts and theories about human mental life and behavior that are purportedly based on psychology find credence among and pass muster with the populace.”

There are, however, numerous complications in this context; we summarize Kenneth S. Pope’s series of articles identifying some of the following categories of pitfalls:

With this in mind, there are a number of ‘tests’ that the results should meet including the gold standard of medical research: randomized controlled trial.

One category of validation is known as ecological validity.

“Beware of false knowledge; it is more dangerous than ignorance.” – George Bernard

Perhaps, the easiest concept for a non-scientist to relate to is the following from Rethink: The Surprising History of New Ideas: 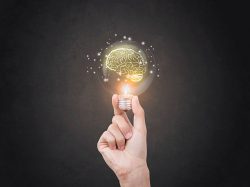 Just to be clear, ecological validity is also a controversial concept in psychological research based on challenges such as lack of control subjects, etc. 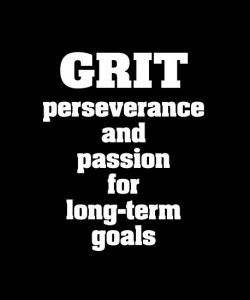 A real-world example of concerns of this nature have risen from the work related to ‘Grit’, the model built by Angela Duckworth. Duckworth has achieved notoriety from her books, Ted Talks and such prestigious awards as the MacArthur Genius.

The very popular term ‘grit’ expresses determination with which one pursues their goal.

By way of full disclosure, we have written about ‘grit’ in the following:

The salient points and counterpoints of the controversy are captured in an article by Anya Kamenetz (MacArthur ‘Genius’ Angela Duckworth Responds to A New Critique of Grit). The author presents two sides via statements from Duckworth and Marcus Crede et al. (Much Ado about Grit: A Meta-Analytic Synthesis of the Grit Literature).

The conclusion of the latter: “My overall assessment is that grit is far less important than has commonly been assumed and claimed,” says the lead author, Marcus Crede. By way of rebuttal, Duckworth has responded: “I can’t see, exactly, how the author goes from these findings to the rather bold claims in his press release.”

The salient points of the back/forth as documented by Kamenetz:

So – there you have it – at one level two academics duking it out.  At another level, a collective focus on what helps people achieve their goals.  No harm? No foul?

Implications to the Business Brain Model

In closing, I summarize in the context of intellectual integrity and review our approach to these articles:

After 60 years on the street, we have pretty good radar for charlatans and snake oil salesmen. However, legitimate differences of opinion and interpreting are part/parcel of acquiring knowledge.

“Plato says that the unexamined life is not worth living. But what if the examined life turns out to be a clunker as well?” ― Kurt Vonnegut Jr., Wampeters, Foma and Granfalloons

In the “Business vs. Science: Are you losing this fight” blog, Bud’s main question is “if the information is available but is not being used, I put the question to you – why” and I believe this strongly relates as to why people are the most difficult aspect of business. I think being open to change is a huge obstacle that needs to be overcome by individuals in businesses today. I agree that change is scary and often requires a lot of preparation before it can be implemented, but the result could… END_OF_DOCUMENT_TOKEN_TO_BE_REPLACED

Rarely does a truly inspirational business leader come along who has achieved phenomenal success by challenging traditional thinking and is committed to sharing what he has learned with others – to improve business and the world. All too often organizations operate in cultures where tradition is revered and powerful systems prevent innovation from occurring. Yet both business and education are at a tipping point; mainstream practices are simply not sustainable – it must change.  Successful leade… END_OF_DOCUMENT_TOKEN_TO_BE_REPLACED

“Thank you! This article (How To Exercise Your Decision Making Muscle) helped me close a deal over weekend! We had been working with an investment bank to get investment done in a client’s company for a long, long time. I used many tactics from the article including ‘go / no go date, analysis paralysis explanation and using imagination to see opportunity in a new light – I even gave a copy of the article to the banker. It was extremely timely and helpful – I ought to give you some of the commiss… END_OF_DOCUMENT_TOKEN_TO_BE_REPLACED

The Business Brain Model  occupies a special niche, bringing together decades of experience across a very wide range of business and finance with an extraordinarily in-depth knowledge of the interface of neuroscience and psychology, including the latest developments in those fast-changing domains. This provides a singular insight into how these disciplines interact, and how recent developments in brain science can have a dramatic effect on business success. Bud’s writings should be required re… END_OF_DOCUMENT_TOKEN_TO_BE_REPLACED

“I’ve enjoyed the erudition of your written work, especially your piece on “Laughter In The Workplace”; wherein you gingerly skip from Plato, Aristotle, Hobbes, and Descartes over to Kant and Schopenhauer, (by way of Freud and Spencer) with Abe Lincoln added for good measure. Each individual in your pantheon, especially lately, Kant, has provided important guideposts along the way for my own growth. I particularly appreciated your Laughter piece because it helped me to smile and be more light-he… END_OF_DOCUMENT_TOKEN_TO_BE_REPLACED

The blog post “The Most Difficult Aspect of Business is People” is a very good read and I think most if not all business owners should read it. I completely agree with the author’s thoughts about empathy. I think that most individuals tend to categorize sensitivity and the ability to understand and share feelings with weakness, therefore this always leads to there being “that guy” in most businesses. I believe that businesses that show more empathy have greater chances of success as it improves… END_OF_DOCUMENT_TOKEN_TO_BE_REPLACED

I really enjoyed reading the post on the value of people in a business and the difficulty associated with managing different personalities and skills. I particularly enjoyed the discussion on empathy as one of the most special and important gifts of our brain. I believe that empathy is an aspect of the human condition that affects so many aspects of social relationships, and can completely dictate the way we feel about someone, how we receive and react to them, and in the context of a busines… END_OF_DOCUMENT_TOKEN_TO_BE_REPLACED