Please note that the references in these articles to Buddhism are intended to relate to what is called “Secular Buddhism” – devoid of the spiritual aspect.

In the interview with Terry Gross titled Can Buddhist Practices Help Us Overcome the Biological Pull of Dissatisfaction? he shares: “What I can say about meditation is that it attacks the levers that natural selection kind of uses to control us, at a very fundamental level.”

Let’s consider a couple of examples where evolutionary baggage impacts the Business Brain:

One of the classic examples in this category is a phenomenon known as “fundamental attribution error”, which Robert Wright deals with in detail in Why Buddhism Is True.

The fallacy here is the tendency to rationalize people’s behavior by our perception of the “kind” of person they are (dispositional) as opposed to the situation in which we find them (situational).

The objective is to find the correct balance of disposition and situation – a balance between affect and reason.

As an example (scholarly references from Wright that I have gone back and reviewed), of the extreme position in this regard, Lee Ross (The Intuitive Psychologist and His Shortcomings: Distortions in the Attribution Process) stated “clerics and criminals rarely face an identical or equivalent set of situational challenges.”

Even more definitively, Gilbert Harman (Moral Philosophy Meets Social Psychology) states that “there is no empirical basis for the existence of characteristic traits.”

This human predicament is such that beyond one’s personal interactions, business people need to have acute relationship skills as they deal with partners, employees, customers, competitors etc. While I have written previously on meeting environments, non-verbal communications etc. regarding interactions, we must first start with a rationale and objective perspective of the people around us. 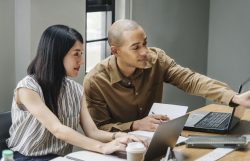 Let me start by summarizing comments from earlier articles I have written on this topic:

One additional example – the inclination of ‘false positive’ errors manifests itself in our decisions.

Finally – one illustration that overlaps both #1 and #2: the inclination to label someone ‘trustworthy’ (or vice versa) inevitably occurs before you have all the evidence.

As we reflect on past and current references and some of the conclusions I have drawn here, we need to be ever more conscious of the fact that our behavior in interpersonal interactions and decision making is not being driven by a rationale conscious mind that is “in charge”.

I have at various times and in various places put forth the proposition that the responsibility to be objective in our decisions and fair in our treatment of others is enhanced in the world of business. I believe that business people have both a professional and personal obligation in these contexts. At Kirchner Group we have institutionalized this responsibility in various ways such as our earn/return and our head, hip and heart models.

Conclusion: Mindfulness and the Evolutionary Context

“Meditation is neither shutting things out nor off. It is seeing things clearly, and deliberately positioning yourself differently in relationship to them.” ― Jon Kabat-Zinn

There is now a preponderance of information that mindfulness can be an essential aid in the world of business. Given the world view (perception) you create is subjective and constrained, mindfulness helps you to step back and see the “big picture”. In other words, it is more about thought and less about emotion.

In contrast to the implication of a naive orientation:

In closing, I offer up still one additional rationale for ‘promoting’ mindfulness. If none of the preceding were fact (or only partly true), what could possibly be the downside of business people who were more self-reflective and methodical?

“One of the things that’s most lacking in the world is not emotional empathy, it’s cognitive empathy meaning we have trouble seeing things from the point of view of other people … That is more urgently needed than emotional empathy.” – Robert Wright as cited by Sean Illing

In the “Business vs. Science: Are you losing this fight” blog, Bud’s main question is “if the information is available but is not being used, I put the question to you – why” and I believe this strongly relates as to why people are the most difficult aspect of business. I think being open to change is a huge obstacle that needs to be overcome by individuals in businesses today. I agree that change is scary and often requires a lot of preparation before it can be implemented, but the result could… END_OF_DOCUMENT_TOKEN_TO_BE_REPLACED

Rarely does a truly inspirational business leader come along who has achieved phenomenal success by challenging traditional thinking and is committed to sharing what he has learned with others – to improve business and the world. All too often organizations operate in cultures where tradition is revered and powerful systems prevent innovation from occurring. Yet both business and education are at a tipping point; mainstream practices are simply not sustainable – it must change.  Successful leade… END_OF_DOCUMENT_TOKEN_TO_BE_REPLACED

“Thank you! This article (How To Exercise Your Decision Making Muscle) helped me close a deal over weekend! We had been working with an investment bank to get investment done in a client’s company for a long, long time. I used many tactics from the article including ‘go / no go date, analysis paralysis explanation and using imagination to see opportunity in a new light – I even gave a copy of the article to the banker. It was extremely timely and helpful – I ought to give you some of the commiss… END_OF_DOCUMENT_TOKEN_TO_BE_REPLACED

The Business Brain Model  occupies a special niche, bringing together decades of experience across a very wide range of business and finance with an extraordinarily in-depth knowledge of the interface of neuroscience and psychology, including the latest developments in those fast-changing domains. This provides a singular insight into how these disciplines interact, and how recent developments in brain science can have a dramatic effect on business success. Bud’s writings should be required re… END_OF_DOCUMENT_TOKEN_TO_BE_REPLACED

“I’ve enjoyed the erudition of your written work, especially your piece on “Laughter In The Workplace”; wherein you gingerly skip from Plato, Aristotle, Hobbes, and Descartes over to Kant and Schopenhauer, (by way of Freud and Spencer) with Abe Lincoln added for good measure. Each individual in your pantheon, especially lately, Kant, has provided important guideposts along the way for my own growth. I particularly appreciated your Laughter piece because it helped me to smile and be more light-he… END_OF_DOCUMENT_TOKEN_TO_BE_REPLACED

The blog post “The Most Difficult Aspect of Business is People” is a very good read and I think most if not all business owners should read it. I completely agree with the author’s thoughts about empathy. I think that most individuals tend to categorize sensitivity and the ability to understand and share feelings with weakness, therefore this always leads to there being “that guy” in most businesses. I believe that businesses that show more empathy have greater chances of success as it improves… END_OF_DOCUMENT_TOKEN_TO_BE_REPLACED

I really enjoyed reading the post on the value of people in a business and the difficulty associated with managing different personalities and skills. I particularly enjoyed the discussion on empathy as one of the most special and important gifts of our brain. I believe that empathy is an aspect of the human condition that affects so many aspects of social relationships, and can completely dictate the way we feel about someone, how we receive and react to them, and in the context of a busines… END_OF_DOCUMENT_TOKEN_TO_BE_REPLACED