Your Brain: By the Numbers 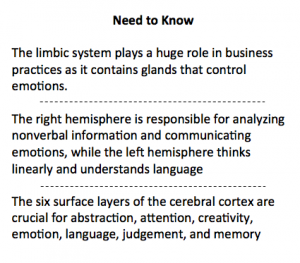 It is with some embarrassment I finally get around to articles focused on the brain. My embarrassment is exacerbated by the irony that I have done a few articles involving the ‘second brain’ but nothing on the first brain.

So – my objective here is to layout the “playing field” of the Business Brain Model. 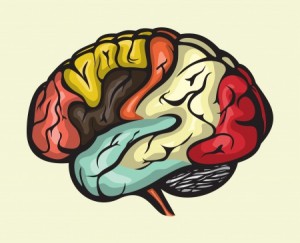 As always I will try to go light on the details and focus on relevant stuff and in this case I have organized the salient aspects “by the numbers.”

Ignoring for the moment my previous writing on the body/brain (including the second brain) and the ubiquitous interactions across areas of the brain, which you will see noted under various lobes, today I am focused on the limbic system which is your emotional control center.

The limbic system contains glands that help manifest your emotions. Many hormonal responses that your body generates are initiated in this area. The limbic system includes the amygdala, hippocampus, hypothalamus and thalamus.

I am singling out the limbic system because of the role emotions play in everything we do in business – decisions, communications etc. This system is also relevant to memories – given most carry an emotional ‘tag.’

“You have two hemispheres in your brain – a left and a right side. The left side controls the right side of your body and right controls the left half. It’s a fact. Therefore, left-handers are the only people in their right minds.” ~ W.C. Fields (also attributed later to Bill “Spaceman” Lee)

The cerebellum is much like the cerebrum in that it also has two hemispheres (and many of the folds we will discuss).

The brain is made of the forebrain, midbrain and hindbrain. The forebrain contains the cerebrum, thalamus and hypothalamus (part of the limbic system). The midbrain, housing the tectum and tegmentum (and connecting the brainstem to the thalamus), is involved in input from senses. The hindbrain consists of the cerebellum, pons and medulla. The midbrain, pons and medulla, all together, are usually called the brainstem or hindbrain.

Focusing on the parts you are most likely to hear about:

The limbic system is located deep within the cerebrum. (See more in our decision-making or communication sections. )

(See more in our body and brain sections)

The cerebrum is composed of four lobes – each with primary functions but with considerable overlap:

As you will note huge amounts of various parts of the brain are devoted to processing your sensory input. We gather information and relate to the world around us via the sensory input to the brain. Sensory input is related to cognitive base, memory creation – the list goes on.

Higher functions occur in the highly wrinkled (to increase the area) six surface layers of the cerebral cortex which represents the bulk of your cerebrum.

These areas are crucial in your complex cortical functions that include abstraction, attention, creativity, emotion, language, judgment, and memory. They are also involved in the combination/composition of your movements.

“The brain is wider than the sky.” ~ Emily Dickinson

Seven is the Thinker, the Seeker

I don’t buy into Numerology, but I had to throw that out there since it lined up with our numeric count and it timed perfect for me to toss this conversation over to you.

For the do it yourselfers, I am reminded about one of the classics from my library:

Full disclosure: although I’ve had this book since it was published (2013) I’ve yet to make it to the end. Prepare for heavy slugging!

And finally, if you are visual oriented watch Allan Jones’ TED Talk “A Map of the Brain.” He will literally give you a guided tour of a real brain and then drive you through a topographical-like map of the brain. Enjoy!

In the “Business vs. Science: Are you losing this fight” blog, Bud’s main question is “if the information is available but is not being used, I put the question to you – why” and I believe this strongly relates as to why people are the most difficult aspect of business. I think being open to change is a huge obstacle that needs to be overcome by individuals in businesses today. I agree that change is scary and often requires a lot of preparation before it can be implemented, but the result could… END_OF_DOCUMENT_TOKEN_TO_BE_REPLACED

Rarely does a truly inspirational business leader come along who has achieved phenomenal success by challenging traditional thinking and is committed to sharing what he has learned with others – to improve business and the world. All too often organizations operate in cultures where tradition is revered and powerful systems prevent innovation from occurring. Yet both business and education are at a tipping point; mainstream practices are simply not sustainable – it must change.  Successful leade… END_OF_DOCUMENT_TOKEN_TO_BE_REPLACED

“Thank you! This article (How To Exercise Your Decision Making Muscle) helped me close a deal over weekend! We had been working with an investment bank to get investment done in a client’s company for a long, long time. I used many tactics from the article including ‘go / no go date, analysis paralysis explanation and using imagination to see opportunity in a new light – I even gave a copy of the article to the banker. It was extremely timely and helpful – I ought to give you some of the commiss… END_OF_DOCUMENT_TOKEN_TO_BE_REPLACED

The Business Brain Model  occupies a special niche, bringing together decades of experience across a very wide range of business and finance with an extraordinarily in-depth knowledge of the interface of neuroscience and psychology, including the latest developments in those fast-changing domains. This provides a singular insight into how these disciplines interact, and how recent developments in brain science can have a dramatic effect on business success. Bud’s writings should be required re… END_OF_DOCUMENT_TOKEN_TO_BE_REPLACED

“I’ve enjoyed the erudition of your written work, especially your piece on “Laughter In The Workplace”; wherein you gingerly skip from Plato, Aristotle, Hobbes, and Descartes over to Kant and Schopenhauer, (by way of Freud and Spencer) with Abe Lincoln added for good measure. Each individual in your pantheon, especially lately, Kant, has provided important guideposts along the way for my own growth. I particularly appreciated your Laughter piece because it helped me to smile and be more light-he… END_OF_DOCUMENT_TOKEN_TO_BE_REPLACED

The blog post “The Most Difficult Aspect of Business is People” is a very good read and I think most if not all business owners should read it. I completely agree with the author’s thoughts about empathy. I think that most individuals tend to categorize sensitivity and the ability to understand and share feelings with weakness, therefore this always leads to there being “that guy” in most businesses. I believe that businesses that show more empathy have greater chances of success as it improves… END_OF_DOCUMENT_TOKEN_TO_BE_REPLACED

I really enjoyed reading the post on the value of people in a business and the difficulty associated with managing different personalities and skills. I particularly enjoyed the discussion on empathy as one of the most special and important gifts of our brain. I believe that empathy is an aspect of the human condition that affects so many aspects of social relationships, and can completely dictate the way we feel about someone, how we receive and react to them, and in the context of a busines… END_OF_DOCUMENT_TOKEN_TO_BE_REPLACED