A Smile is Not Just a Smile. Nonverbal: Part Four 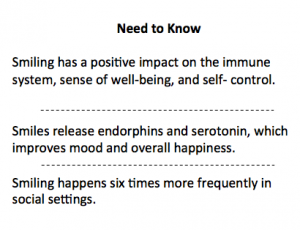 This is the final installment of our series on nonverbal communication. So far, here is what I have covered:

Because Exploring the Business Brain is based on our Business Brain Model℠, there is a constant theme – holistic approaches. Today I ask you to think of the smile as a holistic signal when it comes to nonverbal communication.

“I’d rather have a fake smile than a nasty stare,” ~ Tamara Ecclestone, model

I am also intrigued by the fact that at least one version of the smile cannot be faked.  Think about that! When did you last hear about a spoken word that couldn’t be twisted?

Another reason for a focus on the smile is its inherent ability to make us feel healthier, happier and more confident. To different degrees this is a benefit to both sender and receiver. If you think back to our performance post you will understand the implications here.

Physiologically – smiles have been shown (real science) to have a positive impact on immune system, sense of well-being and self-esteem, blood pressure, self-control and resilience against stress.

Biochemically – smiles release endorphins and serotonin. Endorphins (natural painkillers) enhance our immunity. Serotonin (natural anti-depressant) enhances our mood. Certain people on Wall Street would (do) pay a lot for a pharmaceutical that could do this!!

While this is Part Four of a series on nonverbal communication I thought it was clever to introduce performance, neurotransmitters, body/mind linkage, etc. all of which are in future posts. I couldn’t resist the temptation!

Smiles, given there (muscular) nature, integrate the entire face – eyes, lips, etc. I know I segregated the eyes from the face in “Part Three: A Field Guide to Nonverbal Communications,” but now we are considering them together for reasons that will become obvious.

When you smile it all starts in your brain (surprise!), which transmits the signal thru the seventh  cranial nerve. The pathways for smiling are quite complicated, with both unconscious and conscious connections that receive inputs from different parts of the brain but are hardwired to display emotion. This will stimulate the zygomatic major muscle, which pulls up the corners of the mouth. Pretty simple – pretty mechanical (actually neuromuscular)!

I have, of course, simplified this a bit – there are 43 muscles in the face and some people argue about how many of them get engaged in the spectrum of smiles and related expressions but we are going with the KISS (Keep It Simple, Stupid) principle. Having said that, comedians like Jim Carrey are likely in part successful because they can make facial expressions most people can only make involuntarily.

We’ll come back to other aspects later, but for the discovery by 19th century neurologist Guillaume-Benjamin-Amand Duchenne – the product of the above is known as: The Duchenne Smile. (Incidentally, Paul Ekman, who we mentioned in an earlier post, substantiated much of his work.)

Imagine having a smile named after you!

(One quick caveat and one that makes me cringe about the world we live in – the only exception to the above is if someone has had Botox treatments!)

The pre-Botox Duchenne concluded the mouth smile conveys the will but the eye (‘true’) smile does not – in other words it is a perfect mirror of our emotion since you cannot voluntarily contract these muscles.

Let’s make this straightforward: crow’s feet around the eyes mean you are doing business with someone who wants to do this business and with you!!

The Power of a Smile

How powerful is a smile phenomenon? “The Face of Emotion,” by Eric Finzi, as well as other sources I have read, point out some amazing items.

The Duchenne smile also appears to be a strong indicator of success. If one were so inclined, you could speculate on the cause vs. effect. Researchers at the University of California, Berkeley studied the expressions of women in the college yearbook. Just under half displayed the Duchenne smile —and the subject’s “positive emotional expression predicted favorable outcomes in marriage and personal well-being up to 30 years later.”

If you feel compelled to have a more scientific treatment of this topic – I direct you to the Association for Psychological Science article “The Psychological Study of Smiling,” by Eric Jaffe.

In the “Business vs. Science: Are you losing this fight” blog, Bud’s main question is “if the information is available but is not being used, I put the question to you – why” and I believe this strongly relates as to why people are the most difficult aspect of business. I think being open to change is a huge obstacle that needs to be overcome by individuals in businesses today. I agree that change is scary and often requires a lot of preparation before it can be implemented, but the result could… END_OF_DOCUMENT_TOKEN_TO_BE_REPLACED

Rarely does a truly inspirational business leader come along who has achieved phenomenal success by challenging traditional thinking and is committed to sharing what he has learned with others – to improve business and the world. All too often organizations operate in cultures where tradition is revered and powerful systems prevent innovation from occurring. Yet both business and education are at a tipping point; mainstream practices are simply not sustainable – it must change.  Successful leade… END_OF_DOCUMENT_TOKEN_TO_BE_REPLACED

“Thank you! This article (How To Exercise Your Decision Making Muscle) helped me close a deal over weekend! We had been working with an investment bank to get investment done in a client’s company for a long, long time. I used many tactics from the article including ‘go / no go date, analysis paralysis explanation and using imagination to see opportunity in a new light – I even gave a copy of the article to the banker. It was extremely timely and helpful – I ought to give you some of the commiss… END_OF_DOCUMENT_TOKEN_TO_BE_REPLACED

The Business Brain Model  occupies a special niche, bringing together decades of experience across a very wide range of business and finance with an extraordinarily in-depth knowledge of the interface of neuroscience and psychology, including the latest developments in those fast-changing domains. This provides a singular insight into how these disciplines interact, and how recent developments in brain science can have a dramatic effect on business success. Bud’s writings should be required re… END_OF_DOCUMENT_TOKEN_TO_BE_REPLACED

“I’ve enjoyed the erudition of your written work, especially your piece on “Laughter In The Workplace”; wherein you gingerly skip from Plato, Aristotle, Hobbes, and Descartes over to Kant and Schopenhauer, (by way of Freud and Spencer) with Abe Lincoln added for good measure. Each individual in your pantheon, especially lately, Kant, has provided important guideposts along the way for my own growth. I particularly appreciated your Laughter piece because it helped me to smile and be more light-he… END_OF_DOCUMENT_TOKEN_TO_BE_REPLACED

The blog post “The Most Difficult Aspect of Business is People” is a very good read and I think most if not all business owners should read it. I completely agree with the author’s thoughts about empathy. I think that most individuals tend to categorize sensitivity and the ability to understand and share feelings with weakness, therefore this always leads to there being “that guy” in most businesses. I believe that businesses that show more empathy have greater chances of success as it improves… END_OF_DOCUMENT_TOKEN_TO_BE_REPLACED

I really enjoyed reading the post on the value of people in a business and the difficulty associated with managing different personalities and skills. I particularly enjoyed the discussion on empathy as one of the most special and important gifts of our brain. I believe that empathy is an aspect of the human condition that affects so many aspects of social relationships, and can completely dictate the way we feel about someone, how we receive and react to them, and in the context of a busines… END_OF_DOCUMENT_TOKEN_TO_BE_REPLACED